The noise over the falling rupee is a lot louder these days than the Sensex, justifiably so. The sliding currency threatens India's place at the high table among potential economic leaders of tomorrow. 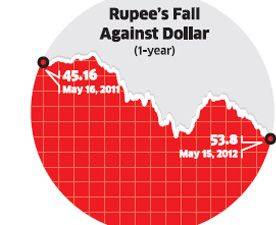 Part of it is due to investors' flight to safety to US assets amid a worsening European Union crisis. But policy makers can't blame international developments for all the ills. They slept at the wheel when macro-economic conditions deteriorated over the years - be it the current account deficit, or the fiscal deficit.

It was taken for granted that overseas investors will forever be pouring money into India, irrespective of its macro-economic conditions. That was not to be.

While the global liquidity tide for years enabled India to enjoy the privilege of a 'growth market', along with China, India's weak fundamentals are getting exposed when the tide is turning.

Imprudent subsidies boosted consumption without consumers realising how much it would actually cost if market prices were charged. 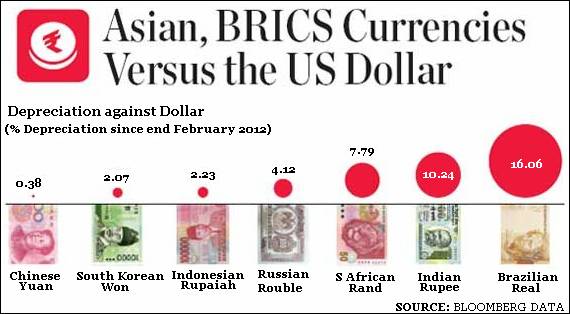 It is time that the rupee is allowed to depreciate and left to find its own level that could slow imports and help raise exports. Foreign investors who are holding back investments because of unfriendly tax proposals should be lured.

Instead of praying for the international economic situation to improve, currency policy makers should be proactive in setting the house in order even if it is at the cost of sacrificing a growth that hides many weaknesses. 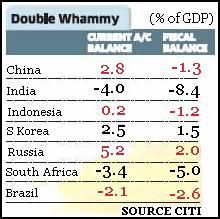 The rupee has been the worse performer among emerging market peers in Asia. After recovering from new lows in December 2011 and early January 2012, the rupee started recovering against the dollar.

This was largely because foreign portfolio investors started pouring in huge funds. Besides, global Indians too invested in NRI deposits offered by Indian banks as the central bank liberalized the interest rates offered on these deposits, which were nearly five times more than what the western world was paying.

However, the rupee's gain started reversing from late February, touching new lows via-avis the US dollar in the last few days.

This is largely because on the one hand, foreign portfolio investors have started going slow on investments into the country - in the month of April, they pulled out close to $1 billion from the Indian markets - on the other, the country's import bill too has risen due to high crude and commodity prices amid a slower growth in exports.

The trend in the rupee is also reflective of India's weak macro fundamentals. Both the fiscal deficit as well as current account deficit is the highest among emerging Asian peers.

India's combined fiscal deficit, including that of state governments, has risen sharply. Besides, the government is also going slow on policy reforms. This has proved a further deterrent to foreign investments into the country.

The pressure on the rupee has been largely due to inadequate dollar supplies to meet India's rising import bill. We cannot totally do away with a lot of imports.

About 20% of India's import bill is to fund its crude oil requirements, which cannot be substituted. Besides, in the past one year, gold imports have also picked up, putting pressure on current account deficit. 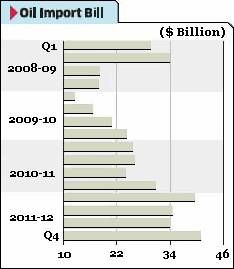 The trade deficit has widened also because exports did not manage to keep pace with imports as developed markets are yet to fully come out of recession.

A single important factor that swings India's trade balance is crude oil imports. If we track trade deficit, it is highly correlated with the oil import bill and global crude prices.

This is because these imports account for a fifth of the country's merchandise imports. Besides being an essential fuel product, its consumption cannot be reduced.

Given the limited domestic crude availability, we have to rely on imports, irrespective of global prices. One way to overcome the volatility is to use foreign exchange reserves to fund its imports.

FDI inflows not too helpful

FDI is the safest and the most desirable form of capital inflow. Though by and large stable, FDI slowed down in the second half of FY11.

Inflows improved sharply in the first quarter of FY12, but have since slowed as the government failed to carry out expected policy reforms.

Long-term investors have been reluctant to invest money in India due to the uncertain policy environment. Economists are suggesting opening up of FDI in retail and insurance sector to encourage more capital flows, though it may still be a drop in the ocean.

April story is different though

These are the most volatile of capital inflows and therefore many conservative economists do not prefer this route. These inflows have been very sensitive to both domestic and international factors and the fastest to move out.

Though steady inflows are desirable to help stabilise the local currency, it is still not perceived to be a reliable source of inflow.

It is hot money that mostly plays on short-term arbitrage and opportunities present in similarly-positioned markets, that too when the policy environment is conducive. 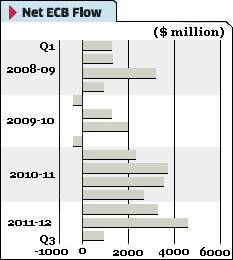 Overseas borrowings by Indian firms have gone up substantially over the years as the government has been liberalizing borrowing norms.

Besides, borrowing costs are cheaper. After a brief slowdown in late 2008 and early 2009, borrowings picked up again. But repayment obligations too have risen sharply.

As a result, net inflows, which matters the most when it comes to local dollar demand, have shrunk to less than $1 billion.

The government is asking borrowers to bring back all their ECB proceeds so that dollar inflows improve.

The Indian Diaspora has always made the most of the weak rupee, and a relatively stable economy at the time of any crisis in their country of residence.

NRI deposits and remittances picked up after the financial crisis of 2008. Of late, there has been a sharp surge in these deposits as the rupee started weakening against the dollar, following the downgrade of the US economy by S&P last August.

RBI further liberalized interest rates on these deposits, making it a lucrative investment despite returns in their home economies being low.