A wait-and-watch sentiment prevails in the textiles and apparel industry. Though businesses are expecting good revenues in the coming months given the positive present and expected status of the order books, there is hesitation among businesses when it comes to investment, according to the just-published Business Confidence Index by Wazir Advisors authored by Varun Vaid and Manjulika Poddar.

The Business Confidence Index from Wazir Advisors is an indicator of what businesses think is going to happen in the near future. In India, so far there has been no such indicator that could provide forward-looking data set or 'lead indicators' about the anticipated performance of the textiles and apparel industry in the country. With an aim to fill this gap, Wazir Advisors has started the first of its kind biannual survey of business confidence to gauge industry sentiments in India.

The first survey was conducted in December 2017 bringing together inputs of businesses across the entire value chain. There were a total of 108 respondents with profile mentioned below.

The outcome of the survey which reflects upon current business sentiments in the industry in India and their expectations from near future is presented below.

Q. How would you rate the current Indian economic conditions vis-a-vis the last six months?

Q. What are your expectations from the overall Indian economy over the next six months?

While 40 per cent of the respondents say that the current overall economy is worse relative to the last six months, 80 per cent are expecting a better scenario in the next six months. There is an overall positive sentiment as the economy has started to recover from twin shocks of demonetization and goods and services tax (GST) implementation. The sentiment is also echoed in the latest United Nations publication World Economic Situation and Prospects 2018, which has predicted the Indian economy to grow at 7.2 per cent this year.

Q. How would you rate the Indian textiles and apparel industry's current performance vis-a-vis the last six months?

Q. What are your expectations about the Indian textiles and apparel industry's performance over the next six months?

More than half the respondents say that the industry's current performance has been worse compared to the last six months. However, almost two-third of the respondents feel that conditions will be better in next six. The industry is expecting increased demand in the backdrop of an easing liquidity crunch.

Industry - Effect of GST on Textiles and Apparel Industry

Negatives: About 73 per cent respondents say that GST led to a decrease in demand and profits while 67 per cent feel it resulted in increased unemployment. This can be mainly attributed to destocking in the value chain owing to uncertainty surrounding GST. This led to strain in the supply chain and decreased demand and profits for manufacturers.

Neutral: Though around half the respondents say that there is an increase in input costs due to GST, there is no clear consensus on the same. The industry is yet to gauge the direct impact of GST on input costs.

Positives: Most of the impact can be attributed to procedural issues and non-clarity among businesses following the implementation. As businesses are getting clarity and acclimatising themselves to the new system, they are anticipating increased demand to meet consumer demand while also replenishing the supply chain.

Q. How would you rate the current performance of your firm vis-a-vis the last six months?

Q. What is the status of your current order book volume vis-a-vis the last six months?

Q. What are your expectations of your firm's overall performance over the next six months?

Majority of the respondents hold an optimistic outlook for the next six months with respect to the firm's performance.

Q. What are your expectations over the next six months on the following parameters?

In general, there is a wait-and-watch sentiment in the industry. Though businesses are expecting good revenues in the coming months given the positive present and expected status of the order books, there is hesitation among businesses when it comes to investment.

However, both the central and state governments are working towards providing fiscal and non-fiscal incentives to boost growth in the industry. Many state governments are coming up with policies that not only provide direct fiscal benefits to businesses but also indirect support through infrastructure development and availability of plug-and-play systems among others. Even the central government is taking measures to boost investment ad trade such as revision of GST rates on manmade fibres (MMF), rebate of state levies (ROSL), duty drawback and merchandise exports from India scheme (MEIS). 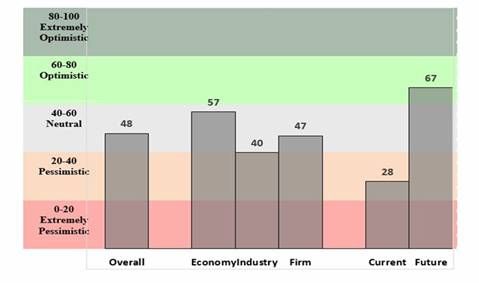 The survey findings point out that the Indian textile and apparel industry is at an inflection point today. The economy and industry are acclimatizing to recent policy changes and are optimistic about the future. Wazir Advisors will be conducting the next survey in May 2018 with an effort to revalidate the positive sentiments reflected in this survey.