The garment industry in Myanmar is beset with problems, right from being hangstrung by inadequate infrastructure facilities to dealing with a labour force that is by and large unskilled. Yet, the industry is growing at a remarkable pace, finds Jozef De Coster in Yangon.

Of course, Indian companies have less reason than Chinese, Korean or Japanese competitors to invest in garment export factories in neighbouring Myanmar. What are these foreign investors looking for in Myanmar, and what do they get?

Most of the foreign investors who recently set up garment factories in Myanmar were mostly attracted by the low labour cost (at the end of 2017, the daily minimum wage still stood at 3,600 kyats/day or $2.63), the availability of workers, and the zero duty access to important export markets like the EU and Japan.

What the investors found in Myanmar was surely not a garment production paradise. Exaggerating somewhat one could say that manufacturing garments in Myanmar is one big headache. The wonderful thing, however, is that in spite of struggling with dysfunctionalities of all kinds and at all levels, the Myanmar garment industry keeps growing fast and attracting new foreign investment.

The main weaknesses of Myanmar as a garment production centre are the nearly total lack of modern fabric production, the low skills level of workers, and the inadequate infrastructure (like steady electricity supply, fast road connections and ports).

Just like other developing countries which at a certain point in time come in the focus of the ever-hungry global fashion industry, Myanmar has a sweet dream. Being a country with a labour force of some 37.5 million, it wants to get a lot of jobs in the garment manufacturing industry (500,000 in the short term and eventually more than double of that in the medium term). Most of these jobs will go to low-skilled female workers. Second, Myanmar wants to gradually increase the value-added created in the garment factories operating within its borders. Therefore, the current CMP activity (cut, make, pack) should quickly be transformed into FOB (free on board) and ally in high-end clothing manufacturing including design, marketing and even branding. Developing in this way, the garment industry could become the same perfect stepping stone towards a productive and diversified national economy like it for instance was for Hong Kong, Taiwan, or South Korea.

Simply click on the top left of the extension and register to get access to 10 shortcuts. Your email will remain secure, but we might get in touch for your feedback!

For the time being, however, it doesn't look as if Myanmar will succeed following the ideal roadmap. CMP continues to dominate. Except for one big Chinese investment in Bago in a vertically integrated textile-apparel plant, no major investments in weaving and dyeing plants have been announced.

There's not much enthusiasm from the side of the Myanmar government to encourage the development of a modern textiles industry that could supply to the garment exporting companies. In the National Export Strategy for the textiles and garments sector, 2015-2019, one can read following vision on the manufacturing of textiles:

"There is little expectation among sector stakeholders that textile production will grow at pace with garment production, and nor should it. Textile manufacturing, in general, is a notoriously low-margin and environmentally dirty enterprise."

"Without large domestic production of cotton or the capacity to produce technically more difficult synthetic fibres, Myanmar does not possess the comparative advantage needed to become a major textile exporter."

Myanmar has a large pool of workers who are keen to get a factory job. Local and foreign employers both agree that the workers in general are open to change and quick to learn. Unfortunately, the majority of the workers applying for a factory job are unskilled. Garment manufacturers who start or expand production in Myanmar have no other choice than to invest heavily in education and training. 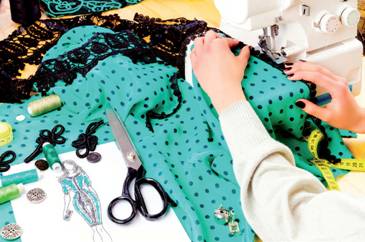 The CEO of a Japanese garment company which is employing 3,800 workers in one of the industrial zones of Yangon, complained about the fact that shortly after the three-month training their operators get, many of them disappear. They leave the company that trained them to take on a job in another factory that is offering some kyats more. The Japanese CEO says: "It's very frustrating. There's no solidarity in the sector. In the end, nobody will want to invest in training."

Myanmar labour laws and sector norms make it easy for workers to leave one job for another. With the high demand for labour, especially in the Yangon region, it has become common for workers to move after a few months or even weeks for a higher-paying job. When workers leave, it can be at a very short notice. Sometimes they leave in groups, with the immediate impact being the disruption of production and inevitable delivery delays. Another adverse effect is that some garment companies become discouraged and reduce their efforts to train higher-skilled technicians.

Bart Vervaeke, CEO at Sioen Apparel, a Belgian producer of technical apparel which in August 2016 started production in Yangon, sees the issue of high workers' rotation in Myanmar as a challenge, not as an insolvable problem. He says: "We believe in training, training, training. Then, retention of the people we have trained becomes most important. On the positive side, we see that we almost don't loose people once they have 6 or more months of experience. Why? We do a lot for our workers and for the local community. We have a very limited number of expat people. We give local people all possibility to take leadership within their expertise. We continue to invest in people. We are positive to increase further technical skills and capabilities."

Many things are problematic in Myanmar and hampering in one way or another the smooth development of the country's garment export industry. Recently, the image of Myanmar as a stable production country suffered a blow due to the violent handling by the military of the Rakhine crisis. In spite of the efforts made by MGMA (which launched a Code of Conduct in 2015), SMART Myanmar, the Internaitonal Labour Organization (ILO) and other organisations, social disputes and strikes in the garment industry still abound. More than 1,200 dispute cases were officially received by the Township Conciliation Bodies in 2016 (successfully resolving 85 per cent of them through conciliation). According to a European law firm located in Yangon, the implementation of the new employment and labour laws is still insufficient, with non-compliance by employers and labour unions, as well as a lack of transparency in labour dispute proceedings.

Factories still have to invest in back-up generators since electricity supply is not reliable. Sioen Myanmar mentions an average of 2.5 powercuts per day. Myanmar's economic capital Yangon, where most of the garment factories are located, is becoming a hellhole of traffic jams. Manufacturers keep complaining about bad roads and port infrastructure and inefficient customs operations.

All these imperfections are undoubtedly slowing down the growth of Myanmar's garment exports. And yet garment export volumes are increasing at a fast pace. From less than $1 billion in 2012, they more than doubled to $2.2 billion in 2016, and will probably reach $2.8 billion in 2017. Also, the number of garment manufacturing companies keeps growing. In 2016, MGMA welcomed 77 new member companies, 65 per cent of which were Chinese. A growing number of retailers have sourcing offices in Yangon, like C&A and H&M (the latter is working with around 40 factories in Myanmar).

If you ask garment manufacturers who just ventilated their dissatisfaction about a lot of Myanmar issues, what they think about the future, their answer is always that they are optimistic.

They argue that most things can only improve. And their hope is that positive changes will occur in Myanmar at an unprecedented high speed. The preferred example of unexpected explosive growth they give is the development of telecommunications in Myanmar. Five years ago, SIM cards were outragedly expensive and smartphones were not to be seen in the streets. Today, SIM cards are dirt cheap and mobile phone use has skyrocked. There are now more than 50 million active SIMs in Myanmar (for a total population of 55 million). Also, electronic payments have soared. Prior to 2014, it was quite difficult to find ATMs, even in the centre of Yangon. Now, ATMs are everywhere.