In League with Fashion

Top Hungarian textiles-apparel companies disappeared after the collapse of communism, once made to compete with West European brands. The country now wants to lead the way with responsible fashion, reports Jozef De Coster from Budapest.

Unlike Paris, Milan, London or Barcelona, Hungary's capital Budapest is not a leading European fashion city. But smaller players can have great ambitions too. Inspired by president Gabriella Walek, the National Fashion League Hungary Association (NFLH, Hungarian abbreviation: NDL for Nemzeti Divat Liga) has an ambition that goes far beyond Hungary's weight in fashion. Hungarians today want to be a driving force in the global fashion revolution.

Hungarians speak a language that is very different from any other European language. Could that be the reason that they always seem to be trying, individually and as a nation, to convince the world that they are special in a very unique and even brilliant way?

They lived under communism, imposed on them by the Russians, from 1945 until 1989. They did not like it. In 1956, tens of thousands of people took to the streets of Budapest to demand an end to Soviet rule. Though the rebellion was brutally suppressed, Hungarians got to enjoy a somewhat different, more liberal regime than the other East European countries.

However, when in the Nineties the Hungarian economy opened up to international competition, Hungarian textiles and clothing companies were no match for their Western European counterparts. Most of the big Hungarian companies disappeared from the market. And now, the list of top textiles and apparel companies in Hungary looks very 'foreign'.

The producer of carbon fibre Zoltek is part of Toray Industries (Japan), lingerie manufacturer Felina is of Swiss origin, and the producer of industrial sewing yarn Coats is from the UK. When emerging Hungarian fashion companies are interviewed about the problems they face, most of them quote the lack of capital as the main problem.

An example. Until this year, Hungarian fashion brand Use Unused, which was launched in 2004, was quite succesful in filling the gap between the fast fashion brands and the high fashion luxury brands. But, Hungarian owners became tired of the never-ending search for finances needed to make the sample collections and pay the manufacturing cost. Recently, they dropped out. 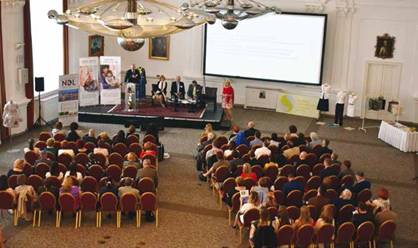 Gabriella Walek, president of the NDL, is expecting much from the launching, at the end of October 2018, of a new innovation hub. She says: "While there are talented fashion industry experts and brands in Hungary and other Central-Eastern European countries that could stand their ground even in an international setting, a high-level production capacity-which would enable them to become viable competitors in Western markets-is still lacking. The most advanced tools and technologies are neither available in the Central-Eastern European region; and in case they are available, they are not accessible to smaller brands. This is a weakness that obstructs 7,300 textiles and fashion industry businesses and experts in the region from being competitive at an international level. An innovation hub with the name '878 Collective' intends to fill this gap."

Thriveo Central Europe Kft, founded by Istv?n Papp, wants to establish this innovation hub as part of the Goldberger project, named after the famous Jewish family which for more than two centuries dominated the Hungarian clothing industry. The NDL is the strategic partner of this hub. The hub will also offer a range of services like testing of materials and manufacturing of prototypes and products, building a comprehensive online textiles and fashion industry database, organising educational and training programmes, and acting as an industry incubator.

The two sides of the revolution

World history is full of revolutions, defined as sweeping transformations of entire societies. Because of painful experiences with fast and brutal revolutions, Europeans now tend to prefer slow changes that may need several generations above disruptive revolutions. However, taking into account the enormous, partly irreversible damage that the present fashion system is causing to people and nature, opting for a slow change is out of the question. So, Walek and her friends advocate a swift revolution, involving the production as well as the consumption side of fashion. They promote a Doughnut-oriented fashion production and a responsible fashion consumption. 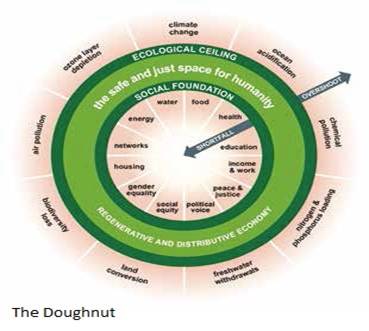 'Doughnut' refers to the theory explained by British economist Kate Raworth in her book Doughnut Economics: Seven Ways to Think Like a 21st-Century Economist. Raworth contends that humanity's 21st century challenge is to meet the needs of all within the means of the planet. In the domain of fashion, this means, among other things, that no one should be exploited while manufacturing products, and that collectively the industry does not overshoot its pressure on Earth's life-supporting systems. The Doughnut of social and planetary

boundaries (see graphic below) is a playfully serious approach to framing that double challenge. It can be used as a handy compass for the urgently needed revolution in the fashion industy. Brand consultants Wolff Olins, based in London, New York City and San Francisco, challenge companies to ask themselves, "Is our brand a doughnut?"

And what is 'responsible fashion consumption'? This is consumption based on purchase decisions made by well-informed consumers who are willing to take responsibility for themselves and for the common good. This may sound simple, but it's not. No fashion consumer can be well informed as long as fashion brands are not highly transparent. Also, consumption of fashion is in itself often consumption of a mass of clothing items one does like but doesn't need.

The contribution of NDL 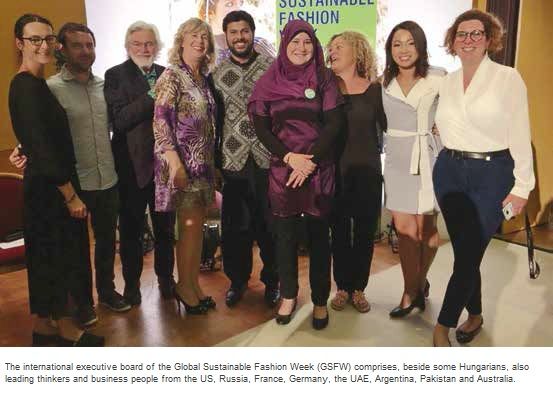 "The global fashion industry, which is not transparent and is environmentally damaging, needs a revolutionary change in how the clothes are sourced, produced and purchased Therefore, the National Fashion League Hungary Association joined the international campaign of the Fashion Revolution movement. Since March 2017, I have been working as Fashion Revolution's country coordinator in Hungary," says Walek.

Though the NDL's resources are limited, Walek and her brothers-in-arms have put their stamp on the fledgling fashion revolution.ey have apparently followed the advice of Helen Charles-Edwards of British management advisor Stone & River: "Today, leadership is about creating a different kind of structure-one which opens the space for people to participate, explore perspectives and tensions, and creates the conditions for true collaboration around the issues that really matter." The NDL has brought together a band of forward thinking people who sometimes meet in formal settings and at other times very informally. "We like to call ourselves a family,", says Walek.

In 2015, the NDL created a special ECO team integrating designers, artists and professionals distinguishing themselves by their eco-friendly approach to fashion and art. Since 2016, the NDL has been organising every year the Global Sustainable Fashion Week (GSFW). This event has, as the name indicates, a really global reach. The international executive board of GSFW comprises, beside some Hungarians, also leading thinkers and business people from the US, Russia, France, Germany, the UAE, Argentina, Pakistan and Australia.

There are also several creative people from India putting in their bit. Asmita Marwa participated in the first GSFW's eco-fashion show in Budapest in 2016. After her success, the Indian embassy in Budapest invited her to their own cultural event. Sruthi Nagulavancha, who lives in Oxford, UK, was a lecturer and exhibitor at the third GSFW. She is known for rethinking Indian saree fabrics made on traditional Indian looms and experimenting with recycling and circular fashion. Madhusudan Kumar Lal ("a very talented artist and designer," according to Walek) works in the creative team of the NDL.