The latest Wazir Textiles Index (WTI) shows that there has been a double-digit growth in both sales and profitability among top Indian companies. Exports, however, remains a matter for worry. 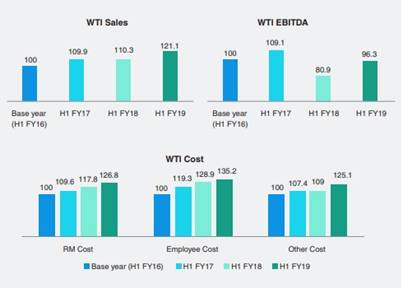 The Wazir Textiles Index (WTI), which assesses the cumulative financial performance of the top Indian textiles companies, has released its findings on the market performance of Indian textile sector for the first half of FY19. According to the findings, WTI Sales was calculated to be 121.1 in the first half of FY19 (base year H1 FY16=100), growing significantly by 10 per cent as compared to H1 FY18. The WTI EBITDA (earnings before interest, tax, depreciation and amortisation) was calculated to be 96.3 in H1 FY19. The EBITDA margins have witnessed an impressive growth of 19 per cent in H1 FY19 as compared to H1 FY18. The WTI Cost for raw material (RM), manpower and others were 126.8, 135.2 and 125.1, respectively, in H1 FY19. WTI costs have increased by roughly 5-15 per cent this half year, as compared to the same period last year.

The consolidated sales of the top 10 selected companies were ?21,272 crore in H1 FY19 as compared to ?19,378 crore in H1 FY18, growing by 10 per cent y-o-y (year-on-year). As compared to H1 FY18, the average EBITDA margin increased by 1.1 percentage points to reach 13.8 per cent in H1 FY19. Consolidated RM cost constituted 52.3 per cent of sales in H1 FY19, while consolidated manpower cost constituted 10.2 per cent of sales. Raw material and manpower cost as a percentage of sales have remained almost stagnant during H1 FY19 as compared to H1 FY18. This reflects in the growing profitability of the top Indian textile companies.

GDP and industrial production have grown in H1 FY19 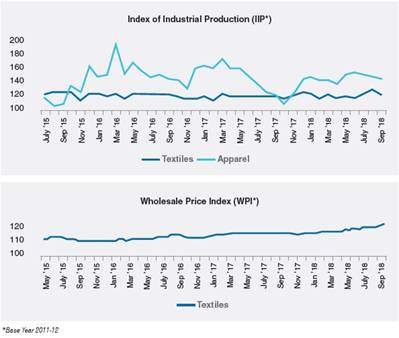 The average Index of Industrial Production (IIP) for textiles and apparel (T&A) increased by 2 per cent and 5 per cent respectively in H1 FY19 compared to H1 FY18. The Wholesale Price Index (WPI) for textiles registered an increase of 3 per cent in H1 FY19, indicating increase in prices. 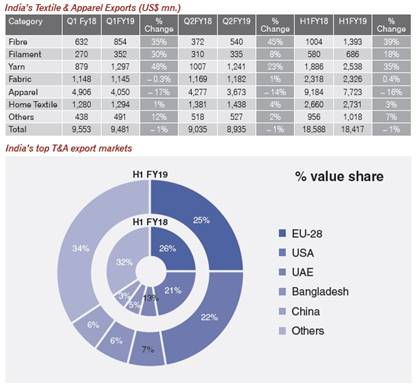 The overall T&A exports in H1 FY19 stood at $18.4 billion, showing a decline of 1 per cent from the previous year. Export of all the categories except apparel have grown in H1 FY19 as compared to H1 FY18. Apparel exports saw a decline of 16 per cent this half year. This is largely attributed to the decline in apparel exports to the UAE, which have dropped inexplicably by 55 per cent during H1 FY19. India's overall T&A exports to UAE also declined by around 50 per cent during first half of FY19. The EU, US and UAE remain the top export destinations for India's T&A products. 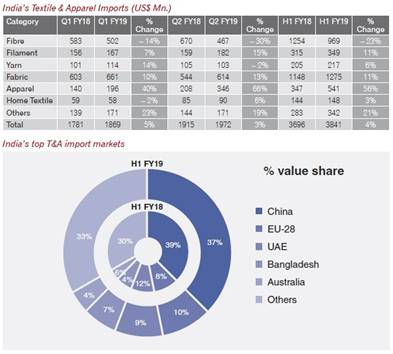 The US imported textiles and apparel products worth $58 billion in H1 FY19, growing by 4 per cent as compared to the same period in the previous year. India's T&A exports to the US increased by 5.2 per cent in H1 FY19. Overall imports of the EU, pegged at $129 billion in H1 FY19 witnessed y-o-y marginal decline of 0.6 per cent. China is the largest import partner for both the US and EU. India's T&A exports to EU increased by 6.2 per cent in H1 FY19. The Indian T&A industry exhibited double-digit growth in overall sales and EBITDA levels during the first half of the financial year 2018-19. However, trade performance was not encouraging during this period. Although improvement was seen in the month of June, July and August, with total T&A exports increasing (compared month on month), September witnessed a steep decline of 18 per cent in overall T&A exports, with apparel declining the highest among all categories. It can be anticipated that apparel exports will remain subdued in the near future. Hence, it would not be wrong to say that the textiles industry is in dire need of undertaking some necessary steps to revive T&A exports.