Rising costs of genuine leather and increasing awareness about animal cruelty have paved the way for synthetic leather to take over. The trends can be seen in the clothing, footwear and upholstery segments, says a Wazir Advisors report.

Synthetic leather, also referred to as faux leather, has taken the industry by storm. Leather was always a luxurious choice for many, who wished to use it as a fabric for clothing, footwear or upholstery. However, the rising cost of genuine leather and the everincreasing awareness of animal cruelty norms has paved the way for the development of man-made leather. Synthetic leather is a more cost-effective and animal-friendly substitute, which has almost all the same qualities of genuine leather.

Over the years, the Indian textile sector had all the tailwinds the businesses needed with largescale investments coming in across the value chain. As a result, the scale of conventional textiles in India has grown. However, in spite of the growing demands of domestic and international markets, the conventional textiles sector is highly saturated. It is facing challenges such as high competition levels, high inflation rates, less control over prices and a decrease in profitability levels.

As India is transforming into a developed nation, huge emphasis is being laid on incorporating the latest technologies in various fields. Since the conventional textiles industry is saturated in terms of development, innovation and value-addition, there is a dire need to explore other segments.

The need of the hour for India’s textiles industry is to expand in niche segments and make the industry globally competitive. In the present scenario, the segment of technical textiles poses great potential for upgrading the Indian textiles industry. It consists of an array of high-engineered niche products, where textiles provide a functional edge, rather than just acting as a surface. The most talked about alternative in the leather industry—synthetic leather—lies among the pool of technical textiles.

Classified as a coated fabric, synthetic leather is commonly of two types: polyurethane (PU)based and polyvinyl chloride (PVC)-based. It is manufactured by coating a base fabric, which can be woven, knitted or nonwoven; with any of the two mentioned polymers.

The global market has seen a paradigm shift towards vegan fashion, which refers to adopting non-leather products. As a result, synthetic leather products are dominating the market of various end-use industries such as footwear, upholstery for automotive, furnishing, apparel, etc. In 2017, the global trade of synthetic leather fabric was approximately $9.8 billion, out of which $6 billion was of PU-coated fabric. In the last ten years, synthetic leather fabric has grown at a CAGR of 3.5 per cent, among which PU leather and PVC leather have grown at a CAGR of 4 per cent and 3 per cent, respectively. 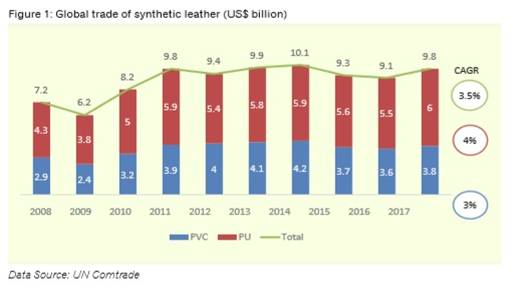 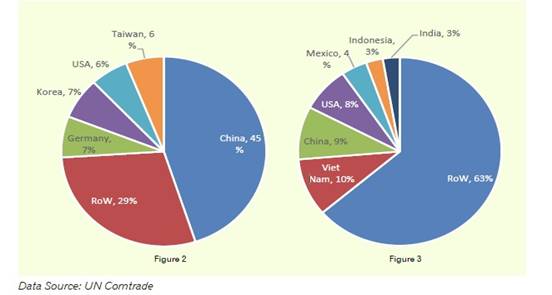 Synthetic leather has found increasing acceptance in global markets (traditionally dominated by natural leather) as cost efficiencies have gained prominence. Synthetic leather, being 4–5 times cheaper than natural leather, has become the preferred choice in mass market products such as footwear, handbags and apparel. The major exported product categories of synthetic leather along with the top exporting nations is represented in the table: 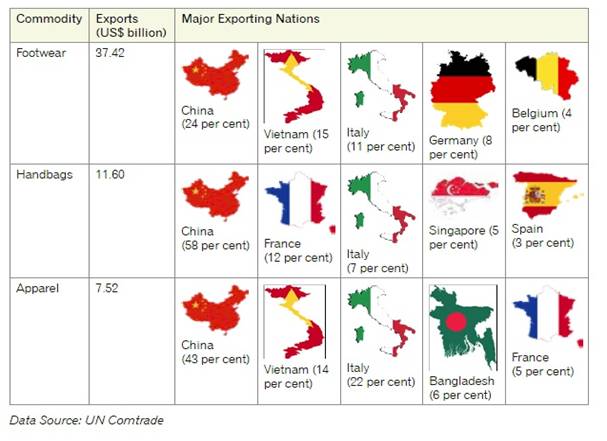 Countries like Vietnam, Bangladesh and Singapore have a good share in the exports of finished products made of synthetic leather, such as footwear and apparel. However, these countries do not have domestic production of synthetic leather fabric, and thus have a high value of imports for the same.

At present, the domestic consumption of synthetic leather is estimated at around 565 million linear metres, which is expected to grow at a CAGR of 7 per cent till 2021. The Indian market segmentation for synthetic leather as per the end-use industries is shown in the figure below: 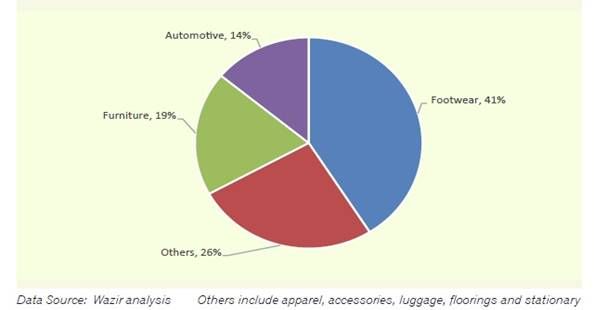 Advances in manufacturing processes and innovation along with increasing affordability of luxury products in emerging markets are expected to stroke the demand for synthetic leather globally. 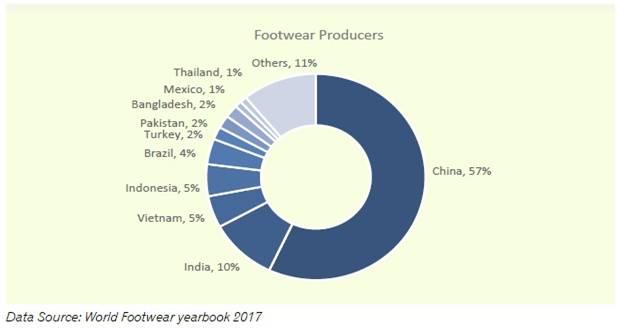 The trend of incorporating athletic shoes into our daily lifestyle and moving towards activityspecific footwear consumption is fueling the demand for synthetic leather in the footwear segment. Moreover, fluctuating climatic conditions in countries is creating the need for several types of footwear, further augmenting the demand for synthetic leather.

The consumption of textiles in automobiles is spread across applications such as carpets, upholstery, tyres, belts, airbags, etc, which is estimated to be over 4.5 lakh tonnes globally. The textile material used amounts to 2.2 per cent of the overall weight of the car. Approximately 40 square metres of textile material is used in an average car for interior components, 18 per cent of which is used for upholstery. In the Indian market, synthetic leather is commonly used as upholstery fabric for mid-size cars. As per the Society of Indian Automobile Manufacturers (SIAM), the domestic sales of passenger vehicles has increased at a CAGR of 7 per cent over the last five years.

The growth of the automotive segment is attributed to rising economic conditions and the need for comfortable commute. With the appreciating market for passenger vehicles, the usage of synthetic leather for upholstery is bound to increase.

The wide range of applications of synthetic leather and growing consumer and industrial demands is creating lucrative opportunities for investment in this segment. Investors these days have the mindset of setting up businesses which require a largescale investment (?300–400 crore), such as for conventional textiles. On the contrary, a technical textiles business can be set up with a small-scale investment (?50–100 crore), as the addressable market is of a smaller size. Similarly, a synthetic leather manufacturing business requires an investment of less than ?100 crore. With such businesses, organisations can diversify the textiles value chain.