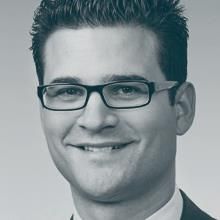 The C 70 is the second card generation offered by Rieter in a width of 1.5 metres. Other suppliers offer cards with working widths between 1.2 and 1.5 metres. This allows direct global comparisons between these cards - with astounding results, as the following findings of tests reveal. In all tests, considerable attention was paid to ensuring that the conditions for the C 70 and for the card of the respective other supplier were comparable. Production capacity, quality and energy consumption were tested.

An American customer compared the yarn quality of a polyester cotton yarn with a count of Ne 20 at various production capacities. A C 70 and a 1.28-metre wide card of the latest design from another supplier were used. The C 70, which the customer had in operation already for a few years, was equipped with new components to ensure that both cards were state-of-the-art. A production of 170 kilograms of sliver per hour was used as a starting point. Up to a production of 181 kilograms per hour, both machines were on a par with each other in terms of quality. The quality indicator used was the number of neps per gram in card sliver, with a limit value as required by the customer of 200 neps. With a delivery of 204 kilograms of sliver per hour, this limit was exceeded several times over by the 1.28-metre card (Fig. 1). This was the point at which the team from the other supplier gave up and withdrew its machine from the race.

The C 70, on the other hand, reliably and continuously produced 227 kilograms of sliver per hour within the customer's quality limits. Even without supervision by the Rieter staff, the C 70 maintained an efficiency rate of 100 per cent over several shifts. The sliver was spun on a rotor spinning machine. Despite the fact that the C 70 produced considerably more card sliver, no changes in the yarn quality, such as imperfections, were noted. The yarn quality remained stable throughout the entire test period. The running values of the rotor spinning machine were very pleasing: The new state-of-the-art card C 70 with high production rates came out with better results compared to the average for the rest of the card C 70 (Fig. 2). The 25 per cent increase in production with the same yarn quality generated huge customer interest in the conversion kit. 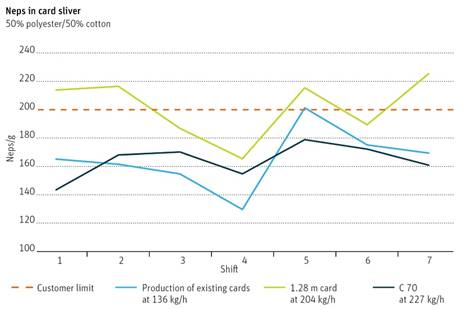 Fig. 1: With a production of 227 kilograms per hour, the card C 70 achieved considerably more stable nep values in the sliver. 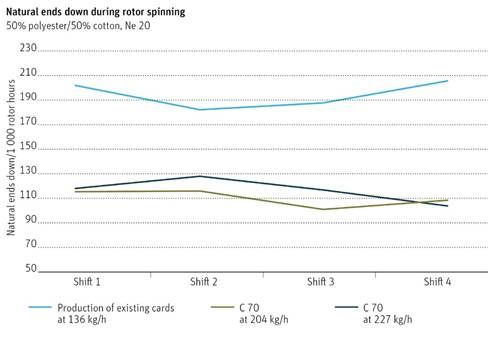 Fig. 2: The sliver of the optimised card C 70 shows excellent running properties on the rotor spinning machine even at high production rates.

A Southeast Asian customer wanted to manufacture open-end yarn from 50 per cent cotton and 50 per cent cotton waste. He was looking for the best card for this project. As the company did not have any experience with Rieter cards at that point, a C 70 was added to the existing 1.28-metre card line for comparison purposes. The question of whether the C 70 produces more efficiently than the existing cards was soon answered: The test showed that the C 70 produced 160 kilograms of card sliver per hour, corresponding to a 20 per cent increase in production compared to the installed cards. A comparison also showed that the sliver of the C 70 achieved 17 per cent fewer imperfections in the yarn (Fig. 3). It is particularly important in the weaving mill that the yarns are even and have the relevant yarn strength and elongation. In terms of evenness and strength, the yarns produced with the C 70 had a slight advantage. In terms of yarn elongation, the values for the samples from the C 70 and the 1.28-metre card were statistically identical.The test results achieved persuaded the customer, and a complete rotor spinning mill with seven C 70 was ordered. 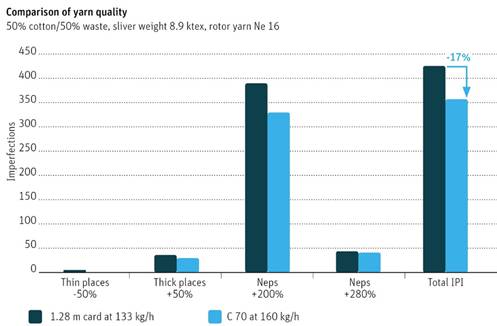 A Turkish customer added a new 1.28-metre card to the existing C 70 card line producing open-end yarn with a count of Ne 30 from cotton. This offered the chance to conduct a comparison of the two cards at an hourly production rate of 95 kilograms of sliver. The energy consumption values recorded confirmed once again that the C 70 is extremely energy-efficient, as shown by the following consumption values, taken directly from the card: The C 70 required 10.2 kWh energy, the 1.28-metre card 12.4 kWh. The delta achieved of 2.2 kWh corresponds to a saving of $1,848 per card per year with the C 70 (assumption: 8,400 hours per year and 10 cents/kW).

The C 70 showed in a wide range of applications that it produces a high-quality sliver even at high delivery speeds. Moreover, in comparison with other suppliers it consumes less energy. Rieter permanently adapts its machines to meet the challenges from the market, in order that customers benefit from state-of-the-art products.