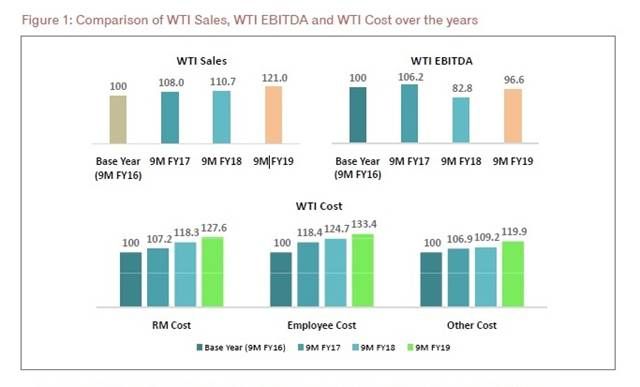 According to the findings, WTI Sales was calculated to be 121.0 during 9M FY19 (Base year 9M FY16=100), which has increased by 9 per cent as compared to 9M FY18. The WTI Cost for raw material (RM), manpower and other expenses (which includes overheads, cost of utilities, administration and selling expenses, etc) were 127.6, 133.4 and 119.9, respectively, for the review period. The WTI EBITDA (earnings before interest, tax, depreciation and amortisation) was calculated to be 96.6 in 9M FY19. There has been a revival in the EBITDA with a significant increase of 17 per cent in 9M FY19 as compared to 9M FY18.

The average index of industrial production (IIP) for apparel increased significantly by 10 per cent in 9M FY19 as compared to 9M FY18, while that of textiles showed a marginal increase of 1 per cent. In 9M FY19, the wholesale price index (WPI) for textiles and apparel registered an increase of 4 per cent and 2 per cent, respectively. 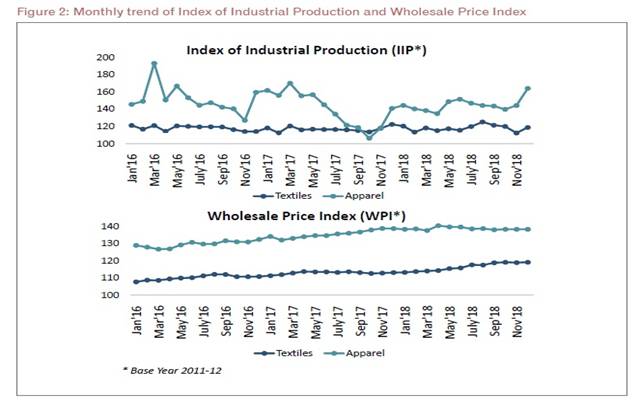 The overall textiles and apparel (T&A) exports in 9M FY19 stood at $27.2 billion, showing an increase of 2 per cent over the previous year. Export of all the categories except apparel have grown in 9M FY19 as compared to 9M FY18, with categories of fibre, yarn and filament registering double-digit growth of 25 per cent, 17 per cent and 12 per cent, respectively. Apparel exports saw a decline of 8 per cent during 9M FY19. This is largely due to the significant decline of apparel exports to the UAE, which have dropped by 39 per cent during 9M FY19. However, apparel exports revived and grew in Q3 FY19 by 14 per cent compared to Q3 FY18, driven by increase in exports to Nigeria and the UAE by 155 per cent and 83 per cent, respectively. Also, apparel exports to the US have increased by $85 million. The EU, US and UAE remain the top export destinations for India's T&A products with a combined share of 54 per cent.

India's T&A imports have increased by 5 per cent in 9M FY19 as compared to the previous year. Imports of all categories except fibre and home textiles have grown in 9M FY19. Apparel imports increased substantially by 52 per cent, primarily due to the rise in imports from countries like Bangladesh and Sri Lanka, which have increased by more than 100 per cent. China continues to be the largest import partner for India with a share of 38 per cent in 9M FY19. However, the imports declined marginally by 2 per cent as compared to 9M FY18. 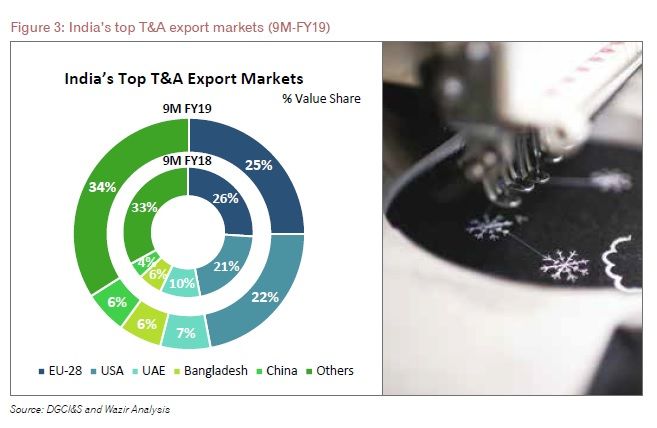 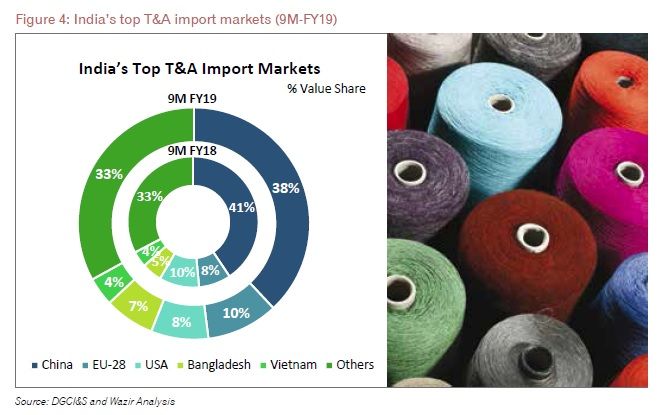 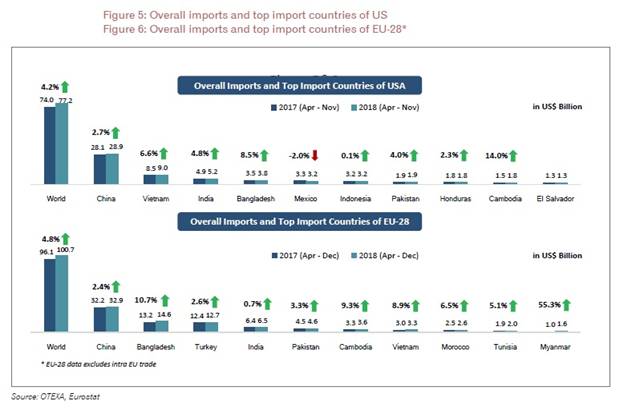 The US imported textiles and apparel products worth $77 billion in 9M FY19, growing by 4.2 per cent as compared to the same period in the previous financial year. The overall imports of the EU, pegged at $100 billion in 9M FY19, witnessed y-o-y increase of 4.8 per cent. China is the largest import partner for both the US and EU. India's T&A exports to the US increased by 4.8 per cent in 9M FY19, while that to the EU increased marginally by 0.7 per cent. 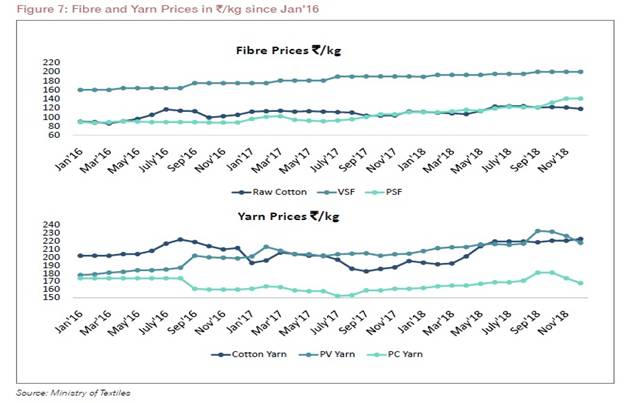 The Indian T&A industry witnessed growth in overall sales and EBITDA levels during 9M FY19. After a negative growth in the first half of the financial year, the T&A exports have shown robust growth of 7 per cent in the third quarter. In particular, apparel exports revived and grew in Q3 FY19 by 14 per cent as compared to Q3 FY18. The Indian T&A industry needs to exhibit growth in its trade performance in order to revive exports and increase the profitability of the sector.

The first nine months of the 2018-19 financial year have brought upon a period of normalcy into the industry. WTI Sales and revival in the WTI EBITDA have also seen an upward trend, which should be seen as a positive sign for the textile industry.

Moreover, during the review period, various textile manufacturers have declared investments in the textiles sector. Various investments have already been made by leading textile manufacturers for expansion. Also, a major boost to the industry is now being provided by various state governments through their industry-friendly policies and incentives. This provides a conducive environment for textiles manufacturers and makes them globally competitive. The recent approval of the scheme to rebate state and Central taxes for apparel and made-ups has also brought relief to the entire industry. This decision has increased the effective rebate offered by Central and state governments on export of garments from 1.7 per cent to 6.5 per cent and that of made-ups from 2.2 per cent to 8.2 per cent.

The industry needs to acknowledge this upward trend and should use the favourable investment opportunities to strengthen their positions and improve their bottom lines.