Keeping traditional skills and finding new skills-that's the challenge as the European textiles and apparel industry shows signs of revival.

Many professionals in Asia believe that the textiles and clothing industry in Europe is definitely gone. That's not a correct view. Yes, after the end of the Multifibre Arrangement (1974-2004), it looked for some years as if the European industry was on a death row.

But today, this industry is growing again and diligently looking for scores of new employees, as the apex trade organisation Euratex (European Apparel and Textile Confederation) declared during its public General Assembly in Brussels, Belgium on June 13. 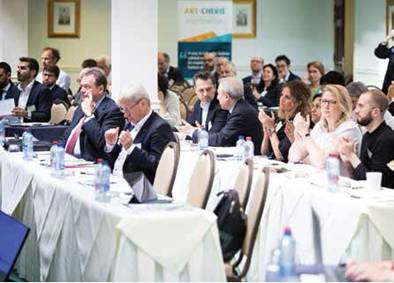 Exiting Euratex president, German Klaus Huneke, reminded the audience that in 2005-12, the already weakened European Union (EU) textiles and clothing industry lost 18 per cent of its turnover and 35 per cent of its employment. However, instead of accepting defeat, the industry posed like a character described by Joseph Heller (Catch 22): "He was going to live forever, or die in the attempt." In the six years since 2012, the industry's turnover has grown by 10 per cent to €179 billion. Extra-EU exports are up by 23 per cent and have in 2018 for the first time reached €50 billion. Labour productivity has grown by an impressive 22 per cent.

Italian Alberto Paccanelli, the newly elected Euratex president, said that in spite of relentless decline of manufacturing jobs, the EU textiles and clothing industry still employs 1.7 million people (UK included). But because 36 per cent of them are over the age of 50, significant replacement for retiring workforce is needed.

Having looked in detail at the problem, Euratex estimates that the EU textiles, clothing, leather and footwear industry will have to hire well over 600,000 employees from now until 2030 to fill the replacement demand and to address new skills. Recruiting new talent and retaining skilled workforce is undoubtedly the number one challenge for the industry.

In search of new skills

Paccanelli said: "When our companies are hiring today, they don't only look for young people with the same skillsets as the retiring workforce. They look for young talent with creative, highly technical and digital skills for high added value jobs."

What are the possible solutions advised by Euratex?

A bit surprisingly, Euratex is not suggesting that as part of the EU immigration strategy, the red carpet be rolled out for foreign specialists originating from (Asian) textiles and clothing countries and excelling in design, product development, digitalisation, and recycling.

Not at all surprising is the call of Euratex upon policy makers at EU, national and regional levels. In his book Hopes and Prospects (2010), American scientist and political activist Noam Chomsky often laughed at the proud rhetoric of company leaders who pose as absolute free market champions while at the same time are eagerly cashing in public funds (actually a kind of government business co-operation that Chomsky encourages, especially in emerging economies). Since the beginning of 2018, Euratex has been one of the leaders of the 'Smart Skills of the European Textile, Clothing, Leather and Footwear Industries for 2030', a flagship project funded with €4 million by the EU.

Euratex is rightly expecting good results from the efforts of the companies, institutes and industry associations themselves. Says Paccanelli: "Modernisation of recruitment practices by companies, coupled by image campaigns at regional, national and European levels can make a positive contribution."

Manuela Geleng, the director for Skills of the European Commission's directorate-general for employment, social affairs and inclusion, gave an overview of the policies and programmes being developed by the EU to support upskilling and training of the workforce. She reminded the audience that EU countries on average spend 4.6 per cent of the GDP (gross domestic product) on initial education, but only 0.1 per cent on continuous life-long learning, which is very ill-adapted to today's fast changing work environments and skill needs. She regretted that now 77 per cent of European companies have to delay or cancel investments because of the lack of needed skills.

The new Euratex president also said that the European textiles and clothing sector has "not the most positive image" among young job starters. That's a euphemism. Young job starters have mostly a very negative image of the sector. They are inevitably influenced by the generation of their parents which across a lot of regions in Europe over many years observed the painful struggle of dyeing and / or restructuring textiles and clothing companies.

But nevertheless, today a number of textiles and clothing schools as well as companies succeed in attracting young people and up-skilling active workers. What is making them attractive?

The Euratex General Assembly was a unique opportunity to hear testimonials from different countries and contexts, with speakers offering insights in dealing with the problem of attracting talent and encouraging skills development. Common issues emerged, as well as clear solutions: a need for a new approach and changes in company cultures are necessary to attract the new generation. Close collaboration between industry and training institutions appears to be the key to the development of skilled professionals and the growth of the reviving sector.

Professor Alexandra De Raeve of the University College Ghent (Belgium) argued that for educational institutes it's important to give textiles and clothing courses attractive names. A decade or so ago, the university offered a Graduate in Confection. Few candidates popped up. Then, the same courses were offered under the label Bachelor in Fashion Technology.

'Fashion' seems to be a magic word. Immediately, the number of students soared from 10 annually to 70-90. Now, the professors in Ghent rack their brains to find a sexier name for Textile Technology.

The hyperkinetic Spanish motivational speaker Emma Giner, who has been gaining experience for more than 20 years at European top companies like Mango and Inditex and is now a professor in Madrid, explained why some companies don't find talented people while other ones are overwhelmed by youngsters who knock at their door. The latter have the knack to empower talent and don't stick to the traditional forms of organisation.

That's exactly what the young French entrepreneur Thomas Delise, CEO of the knitting company Chanteclair, has been doing. He acquired the company with 27 employees in 2017 and is today employing 38. He radically changed the traditional (commanding) management style at Chanteclair as well as the recruitment method. He observes with sad eyes that some rare professional skills and training programmes are gradually disappearing from France and therefore pleaded for more intra-EU mobility of workers (not yet for more intercontinental mobility).

Without any cold-water fear, the Textiles Sector Group of Unindustria Como in the northern Italian 'city of textiles' Como, plunged into a project of worldwide marketing-inviting and hosting foreign students not only from European fashion schools but as well from India, Sri Lanka, Japan and Brazil, among others. Marco Taiana, vice-president of the group, told the audience in Brussels that the support from the textile enterprises of Como under the label ComOn changed the idea these enterprises had about themselves. ComOn, started in 2008, was a success in promoting useful dialogue between the Como industry and young designers. Around 61,000 people attended the events organised by ComOn.

In most European countries, textiles and clothing companies complain that the authorities don't invest enough in modernising sectoral education and training. Fortunately, in some countries, the industry itself is investing in education and training. This is for example the case in Turkey where Itkib (General Secretariat of Istanbul Textile and Apparel Exporter Associations, a member of Euratex) is supporting the Istanbul Fashion Academy.

In Germany, a generous investor in education is the Textile and Clothing Association of North-West Germany. This association invested €20 million in a new vocational training college for the textiles and clothing industry. In Belgium, industry association Fedustria just announced they will spend €200,000 to improve the infrastructure of the textiles department of the University College of Ghent.