Fibre2Fashion explores the trade dynamics in the textile and clothing domains between India and the US.

The US and India are the top major contributors to the textile and clothing trade across the world. The estimated US trade with India for goods and services has reached US$ 142.1 billion in 2018 where exports and imports held out to US$ 58.9 billion and US$ 83.2 billion respectively. The total trade deficit of the US with India was US$ 24.2 billion in 2018.

For apparel, the US is one of the top importing countries across the world and India is among the top five exporting countries. The exports and imports of apparel from India reached to US$18.5 billion and US$ 839.87 million in 2018. The EU and the US accounted for 35 percent and 22 percent of India's apparel exports in the year 2018, followed by the United Arab Emirates (UAE) with a share of 20 percent. The US and the EU combinedly contributed to more than 55 percent of India's apparel exports.

India's textile and clothing exports to the US 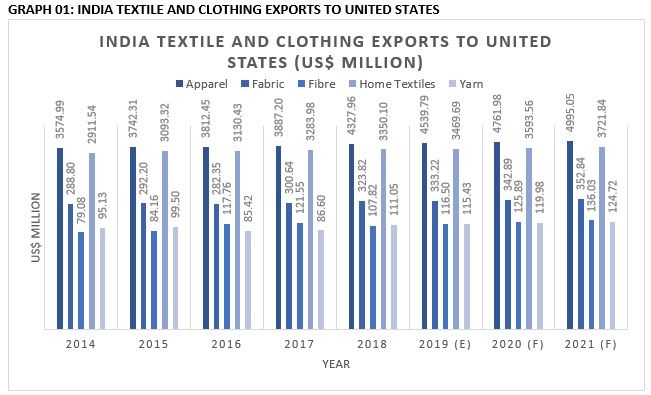 Indian textile and clothing exports to the US, product-wise

Considering the product-wise Indian textile and clothing exports to the US, the percentage share of the Woven Apparel was higher as compared to knitted apparel in 2018. Woven Apparel and Knitted Apparel accounted for 60.6 and 39.4 percent respectively out of total Apparel exports respectively.  Shirts, t - shirts, trousers and shorts, and innerwear collectively held more than 50 percent share of total apparel exports in 2018.

The shirts, t - shirts, trousers and shorts, and innerwear held the percentage shares of 22, 12.4, 9.8 and 8.3 percent respectively out of total apparel exports in 2018. Industrial textiles, swimwear, nightwear, jersey and non-woven did not hold maximum share in the apparel export but these segments had shown high growth rates as compared to other apparel segments between 2014 and 2018.

Indian textile and clothing imports from the US 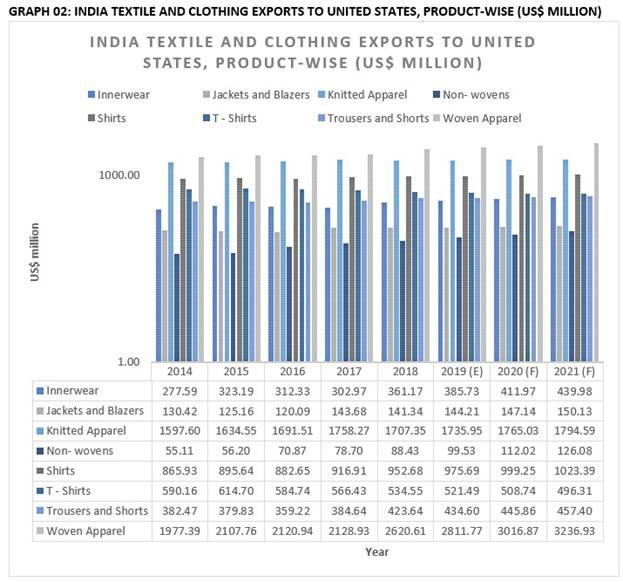 India textile and clothing imports from the US, product-wise

The Indian textile and clothing imports from the US product-wise bifurcation reveals the percentage share of woven apparels to be higher as compared to knitted apparel in 2018. Woven and knitted apparel accounted 72.82 and 27.18 percent respectively out of total apparel imports.  Shirts, t - shirts, trousers and shorts, and innerwear collectively held around 37 percent share of total apparel imports in 2018. Impact of GSP termination on Indian apparel export to the US

Recently, the US has terminated its GSP status effective from June 5, 2019, but it would not impact majorly on the sector. There were 15 products in the ready-made garments (RMG) (HSN 61 & 62) category under the US GSP, which contributed approximately US$ 586.58 million RMG imports of the US. The share of Indian RMG was US$ 17.97 million. Also, the most favoured nation (MFN) tariff in 15 products varies from 0.86 per cent to 14.60 per cent in which India gets duty access with 100 percent margin of preference. These 15 products contributed approximately 0.46 percent to India's apparel exports. The major benefit was concentrated on silk woven clothing of women (62044910) which comprised 58.5 percent of India's total trade under GSP. In this case, the impacts of GSP termination on Indian apparel export to the US have been mitigated. 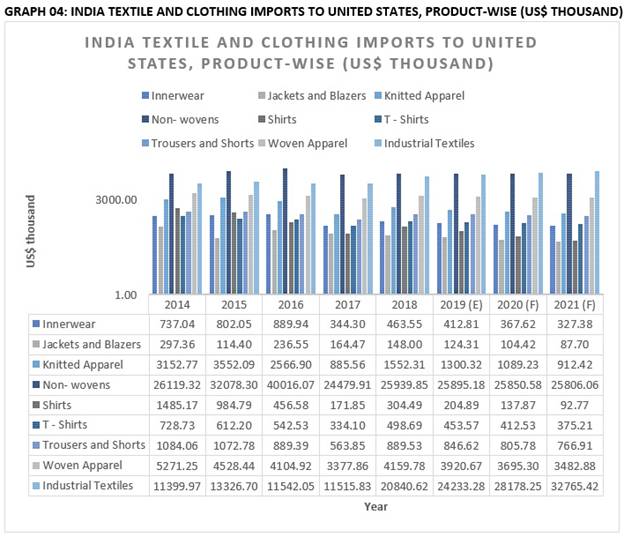 Impact of the trade agreements on India's apparel trade

Today Turkey, Republic of Korea, and Vietnam are listed in the top global apparel exporting nations who are actively engaged in trade agreements. On the other hand, India does not hold free trade agreements (FTAs) with the key apparel importers including the EU, the US, and the UAE. India continued to be among the top exporting countries in recent years, but India would face major decline in exports of apparel with current scenario. India as a developing country faces preferential tariffs from the EU under the Generalised Scheme of Preference (GSP). LDCs (least developed countries) face zero tariff under the EU's "Everything but Arms Agreement".

Shirts, t-shirts and singlets are the major apparel export items of India, but the US has imposed a tariff rate of 32 percent on these items. South Korea faces only 3.3 percent preferential rate from the US for the same product group. This can affect India's competitiveness in the sector across the world. Comparatively, India has good advantage in the export of silk shawls and scarves, but India faces a high tariff rate of 11.3 percent in the US. The Republic of Korea faces zero tariffs under the US-Korea FTA. South Korea also has an FTA with the EU and therefore enjoys zero tariffs. 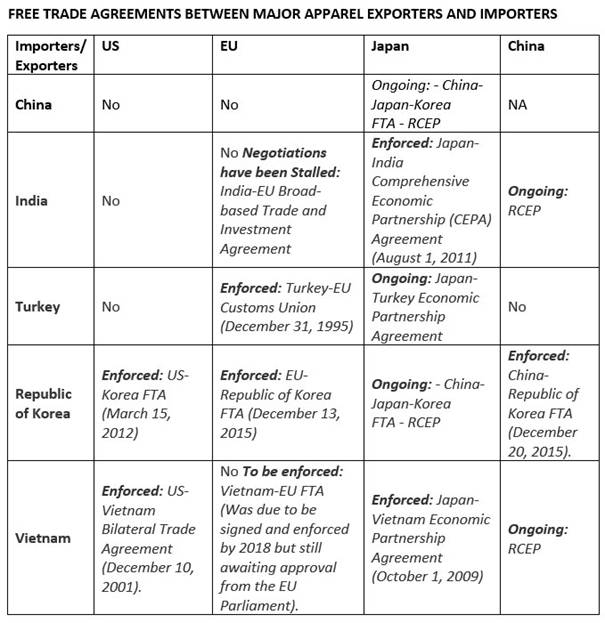 1. Advantages received by other exporting countries who have trade agreements with key import markets.

2. Inability to increase exports after tariff reduction through bilateral trade agreements with countries.

3. Increasing imports without increase in exports despite tariffs are lowered under trade agreements.

4. India needs to explore the costs and benefits of trade agreements with the major textile and clothing importers including the US.

1. More research needed to investigate how country can use its trade agreements to increase market access for the domestic firms in importing countries.

2. India must examine the issues faced by its apparel industry and need to design policies for competition.

3. The government needs to focus on policies and incentives that support companies to grow and increase scale of operation, leads to skill development, supports technology adaptation, reduces logistics and input costs, and improves the ease of doing business.

4. Indian government must encourage exporters through the right policies and support mechanisms to invest in technology, and research and development (R&D), improve quality standards, and move into high-value manufacturing and integrated production processes.

According to Prashant Agarwal, Joint Managing Director, Wazir Advisors, India needs to make itself competitive in the global market with the help of concept of Textile 4.0, the manufacturing excellence. The US-China trade war has created a lot of opportunities for India, but we need to be competitive and must manage with smart factories.

Indian textile companies usually face higher trade tariffs in the developed countries as compare with Bangladesh, Vietnam and Pakistan. The average tariff on textile products faced by India in the EU and the US is 5.9 and 6.2 percent respectively. In comparison, Pakistan, Bangladesh and Vietnam face 0, 0, and 6.1 percent tariff respectively in EU and 5.3, 3.9 and 5.5 percent in the US respectively. Hence India must form a trade agreement with the major apparel importers including the US to promote above figures.