The apparel industry in Iran is flourishing. A Market Intelligence (MI) report from Fibre2Fashion finds that the production and consumption of apparel have been increasing since the marketing year (MY) 2016-17.

For a country where the production volume in the apparel industry is half the nominal capacity, there is considerable scope for expanding operations as well as search for markets. It is with this backdrop in mind that the government of Iran is planning to revamp garment manufacturing across the country-there are some 8,000 units of varying size in all.

Things look promising: apparel production in Iran is expected to grow to $6.95 billion in MY 2020-21 with a CAGR (compounded annual growth rate) of 5 per cent over MY 2017-18. With most of export destinations being the nearby former Soviet republics, export prospects look bright too-apparel exports are expected to reach $97 million in 2021 with a CAGR of 16.20 per cent over 2018.

The apparel production of Iran in value terms was $5.83 billion in MY 2016-17 (March to February). It increased to $6 billion in MY 2017-18 with a growth rate of 3 per cent. The figure is expected to increase to $6.95 billion in 2020-21 with a CAGR of 5 per cent over MY 2017-18. The classic apparel manufacturing accounts for 60 per cent of domestic apparel production. Consumption of casualwear is widespread, but the production of apparel in the country is not enough to meet domestic needs.

According to Iran's Ministry of Cooperatives, Labour and Social Welfare, the production volume of Iran's apparel industry is half of its nominal capacity. Hence, the country is planning to revamp its garment manufacturing units. There are about 8,000 production units across the country, and the current year has been named as the "year of pickup in production." 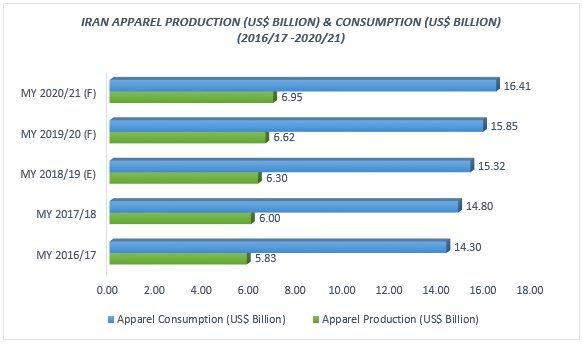 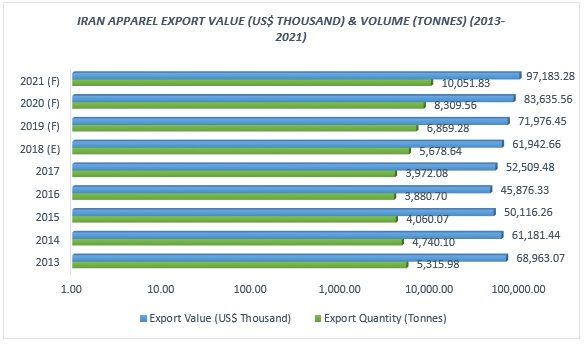 The Iranian government has planned to double its exports to neighbouring countries by the Iranian calendar year of 1400 (which starts in March 2021).The major apparel exporting destinations of Iran are the former CIS (Commonwealth of Independent States) countries including Azerbaijan, Armenia, Belarus, Georgia, Kazakhstan, Kyrgyzstan, Moldova, Russia, Tajikistan, Turkmenistan, Uzbekistan and Ukraine. Out of these, Azerbaijan is at the top of the list. 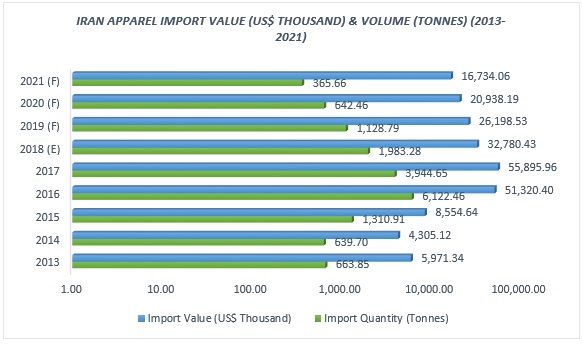 The government of Iran has introduced policies, rules and regulations which are aimed at revamping the country's garment manufacturing industry in order to compete in international markets. This initiative has also led to the imposition of very high tariffs on imports of apparel.

The measures taken by the government include:

Meanwhile, the first set of sanctions imposed by the US in August 2018 restricted Iran's purchase of US currency, while the second in November restricted sales of oil and petrochemical products from Iran. India was one of the eight countries given a six-month waiver to continue its oil trade with Iran, but with the caveat that it should lower its imports.

In addition to the above, the difficulties such as rising shipping costs, unavailability of insurance cover and uncertainty on exchange of documents need to be sorted out immediately. Both governments are said to be working towards it.