McKinsey's 2019 chief purchasing officer (CPO) survey finds that sustainable sourcing at scale is the fashion industry's new must-have. The survey shows that social and environmental sustainability has become a key priority for apparel companies, just as it is becoming an increasingly important issue for consumers and governments.

The survey reflects the perspectives of 64 participating sourcing executives, who together are responsible for a total sourcing value of more than $100 billion. Most report that responsible and sustainable sourcing is already a top priority on their company's CEO agenda-and the area in greatest need of improvement in their companies. As the survey shows, companies also see real urgency in process-improvement actions such as digitization of sourcing processes, consolidation of supplier bases, and end-to-end process efficiency (Exhibit 1). 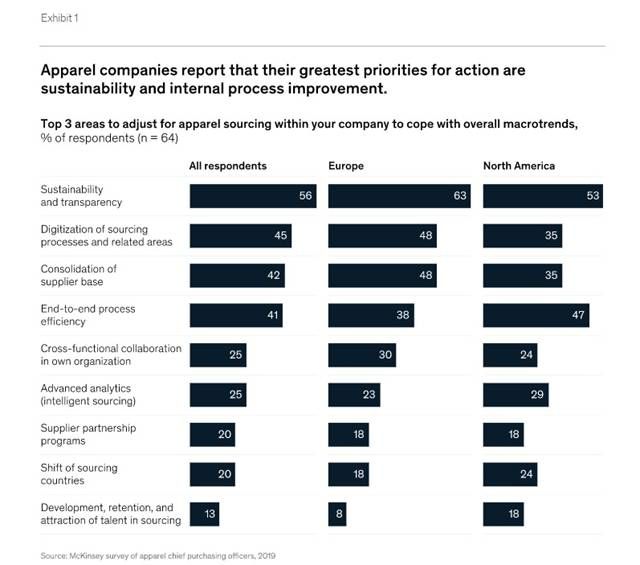 In our survey, we asked respondents to identify the three topics in sustainable apparel sourcing at the top of their agendas for the next five years. The top-ranked area for action was sustainable materials (Exhibit 2). Other priorities were transparency and traceability, supplier relationships, and purchasing practices. 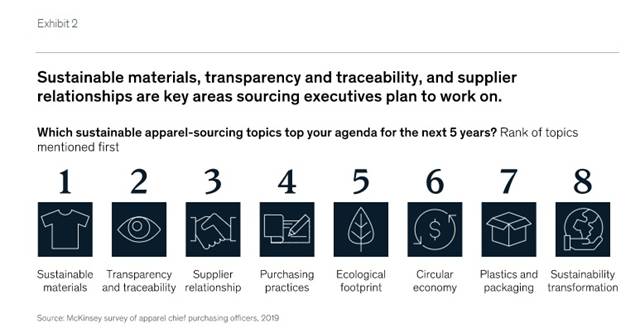 For example, the share of apparel products containing sustainable materials remains low today, but the majority of executives surveyed aspire to source at least half of their product with such by 2025. Likewise, apparel companies are under increasing pressure to create transparency on their supply chains and to share that information with consumers-and eight in ten CPOs surveyed have ambitious plans to step up transparency. Social and environmental sustainability is also taking on much greater importance in supplier relationships: two-thirds of CPOs surveyed said it would likely become a top factor in their supplier ratings by 2025.

The report makes it clear that most apparel companies will need to shift current practices dramatically if they are to deliver on these bold expectations. Indeed, the industry lacks a common language on sustainable sourcing, let alone a shared set of standards. But the findings leave no doubt that sustainable sourcing at scale will be a must for apparel companies over the next five years-and that consumer demand for sustainable fashion is growing rapidly. At the same time, margin pressure is making it even more important that companies improve the efficiency of end-to-end product development and sourcing processes. As our survey shows, executives see no conflict between this imperative and the drive for sustainability.

Our survey also underlines the impact of "Trade 2.0"-increasing trade tensions exemplified by the US-China trade war. CPOs surveyed said they expected the more challenging trade environment to have a high impact on sourcing-cost development over the coming year, adding to margin pressure from consumers. And for US-based fashion companies, trade tensions are also accelerating the shift away from China as a sourcing country-more than half of North American executives surveyed were planning to reduce their sourcing value from China by more than ten percentage points over the coming year.

Bangladesh and Vietnam will be the greatest beneficiaries of the shift out of China. These developments are a reminder that companies need to make progress on sustainability while navigating a volatile, fast-changing environment.

In the years ahead, apparel companies must shape a robust sustainability agenda that addresses both social and environmental imperatives. And they must deliver it at speed and scale, harnessing innovations in technology, standards, processes, materials, and communication.