The Indian Textiles and Clothing (T&C) industry plays a crucial role in the Indian economy and contributes about 7 percent of industrial production and 2 percent of Gross Domestic Product (GDP) of the country.

Industry also creates employment opportunities for about 45 million people and accounts for 12.57 percent of the export of the country with a share of 5.03 percent in textiles (HS Chapter 50 to 60) and 7.54 percent in clothing and made-ups (HS Chapter 61 to 63) in the global market during 2017.

The report estimates the per capita and aggregate demand of textiles & clothing in the country by region, gender, area, income group etc. besides estimating the preference pattern by fibre, product groups viz. woven apparels, knitted apparels, home textiles, etc. in the Household sector of the country. This is the only authenticated report available in the country, which provides domestic market size of textiles at dis-aggregated level.

The report is published on the basis of the textile purchase data collected bi-monthly from selected panel Household across the country. The data base generated from the collected data is analyzed and findings of the report are published in the form of an annual Report. The latest annual report “Market for Textiles and Clothing (MTC): National Household Survey 2017” has been prepared by the Textiles Committee. Besides, estimating the domestic demand for 2015 & 2016, the report has also forecasted the market size for 2017 & 2018.

The key findings of the “Market for Textiles and Clothing (MTC)” are as follows:

1. Domestic demand of Textiles in the Household sector:

Thus, the Household sector contributed 53.39 percent to the overall market size of the Textiles and Clothing and the same has been analysed in detail in the MTC, 2017.

2. Aggregate demand for Textiles & Clothing in Household sector in terms of quantity and value: 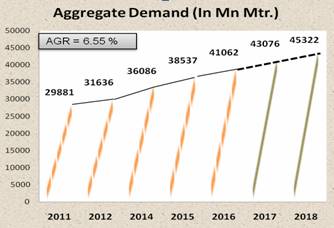 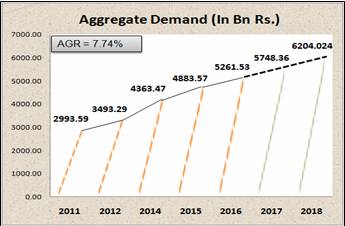 3. Per Capita Demand for Textiles & Clothing in the Household Sector: 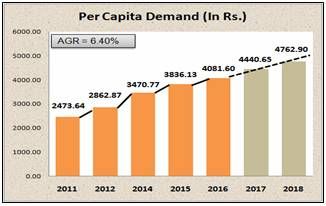 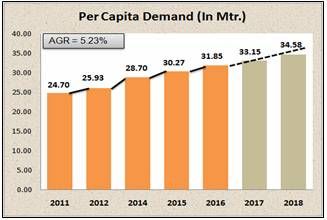 The change in per capita demand indicates that an average person’s consumption of textile has increased by 1.58 metres during the period 2015-16. It is pertinent to mention that while the growth in demand was 6.91 percent in the urban area, it was 6.01 percent in the rural area during the same period.

The survey reveals that out of the total aggregate consumption of 41.06 billion million metres (Per Capita 31.85 metres) of textiles in the year 2016, Manmade and Blended/Mixed textiles together have the largest share of 56.83 percent followed by Cotton textiles with 41.94 percent, Pure Silk textiles with 0.84 percent and Woolen textiles with 0.39 percent. Hence, the demand for manmade fibre based products has been growing and contributing significantly to the overall demand in the Household sector.

1.Demand for Textiles as per the Sector of Manufacturing:

The projected aggregate demand for textiles by sector of manufacturing is estimated for Mill made/ Power loom, Knitted/Hosiery and Handloom sector to be 37.24 billion Metres, 5.56 billion Metres and 2.53 billion metres respectively for the year 2018.

Some important varieties which are highly demanded in the Household sector pertains to (i) personal clothing and (ii) home textiles.

The MTC 2017 report indicates that the market size of personal clothing items was 37.87 billion metres during 2016 as against 35.52 billion metres in 2015 and has experienced a growth of 6.60 percent during the reference period. The

market size of personal clothing items is expected to touch 39.64 billion metres during 2017 as against 41.66 billion metres in 2018 and experiencing a growth of 5.08 percent during this same period.

Demand for some major varieties from Personal Clothing & Home Textiles: 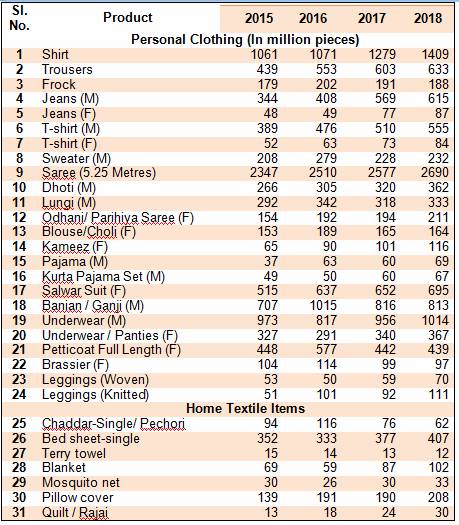 As regards Home textiles items, products like chaddar, bedsheets, towel and terry towels contributed significantly to this segment. In addition, the products like mosquito net, pillow cover or cushion cover, furnishing materials, blankets have also increased their presence in the product basket.

The demand for the Household sector is the major contributor to the overall growth of the sector with 53.39 percent (USD 78.28 billion) share in the total market size, which is expected to touch 54.90 percent (USD 89.88 billion) in 2018. While the export of T&C decreased at 4.66 percent and the demand in Household & non-Household sector grew by 2.82 and 1.51 percent respectively

It is worth mentioning that the growth in Household demand for textiles has brought about additional demand for 2.53 billion metres of fabrics in 2016, which is expected to touch 4.76 billion metres in 2018 from 2015, which is pointer towards required capacity expansion in the fabrics manufacturing in the country.  Similarly, the growing demand for the newly emerged products like legging etc. provides an indication at the change in preference pattern of the consumers in the country during the period. Hence, the many findings in the report may provide authentic data & insights for informed decision making by the businesses, trade & industry, researchers & policy makers etc.