The cotton sector is a major component of Turkey's textiles industry. Cotton yield in 2019-20 is expected to go down a bit owing to a number of reasons, but the cotton base remains strong. A Market Intelligence (MI) report from Fibre2Fashion.

Turkey's image as a high-quality apparel producer is well known, but what is often forgotten is that the country that serves as the link between the East and the West, between Europe and Asia, is also an important player in the cotton industry. Turkey has been a significant exporter of cotton and cotton products to the European Union (EU), and the cotton sector is a vital component of the country's textiles and apparel industry. The sector, however, is expected to see a marginal slump this year as a result of a shrinking domestic market and an economic downturn. Hope for a resurgence lies in the country's strong cotton base, backed by favourable policies.

The textiles industry is a major contributor to the Turkish economy, accounting for 16 per cent of its total exports in 2018. Since 1985, Turkey has invested $90 billion in the sector. Turkey figures in the list of top five countries based on yarn production capacity and is at the sixth position in the production of ready-to-wear items. Turkey's production capacity is estimated at 7.5 million spindles and 700,000 rotors. The country's textile exporters are known for faster order response time and higher quality products. Nearly 36,000 companies operate in the sector.

Turkey is also a significant supplier of cotton and cotton products to the EU. Cotton significantly accounts for growth and development of Turkey's textile industry. It has contributed to exports, foreign investments and employment in the textiles and apparel industry of the nation.

Besides, Turkey is a major importer of high-quality US cotton, and should remain so in the future due to the continuous development of modern technologies and expansion of production facilities in the country. Turkey imported $682 million worth of US cotton in 2018. Despite the 3 per cent anti-dumping surcharge, the US accounted for 41 per cent of the total cotton imports with 99,312 metric tonnes in the first six months of marketing year (MY) 2018-19. The US cotton share will be 45 per cent by the end of MY 2018-19. The EU remained the leading market for Turkish textiles and garment exporters due to geographical proximity, short response time and good quality products.

The county has been facing an economic downturn since mid-2018, including the depreciation of the Turkish Lira. The currency depreciation has helped exports of the products but affected the purchasing power of domestic consumers. The inflation rate was 20 per cent in February 2019.

Production: The three major cotton growing areas are the Aegean, ?ukurova (near Adana on the Southern Coast) and GAP regions. Small amounts of cotton are also produced around Antalya. Aegean cotton is recognised to be of the best quality and preferred by textile producers. It has more staple length (1 5/32") than cotton from ?ukurova (1 3/32") or the GAP (1 1/8") region, although the quality of cotton has improved significantly in the GAP region due to improved seed quality.

The (cotton) planted area and production for MY 2018–19 declined to 525,000 hectares and 806,000 metric tonnes respectively. Yields were affected due to excessive rains, necessitated replanting, cool weather during the season and untimely fumigation with stimulated pest attacks in cotton-growing regions. The heavy rains during the picking season affected yield in the south-eastern Anatolia (GAP) region. Hence, GAP cotton farmers got lower yields and less income in the last season. In addition, a price rise for fertilisers and other chemicals may force those farmers to reduce usage of these inputs in the coming season. It may further affect the yields in the region.

In MY 2019–20, the cotton planting area and production in the country is forecast to reduce to 540,000 hectares and 893,000 metric tonnes respectively. Cotton growers in the Aegean and Cukurova regions received a high return in MY 2018–19 and are expected to plant the crop again. But, cotton growers of the GAP region have no alternative to planting cotton this season due to late picking and heavy rains in winter months. It created field conditions that are not suitable for planting any other crop. Cotton growers of the GAP region got lower returns in the past season due to quality loss, late harvest and depreciation of the Turkish Lira. Usually, cotton plantation in Turkey is carried out between mid-March and mid-May and harvest is done from mid-August through November. 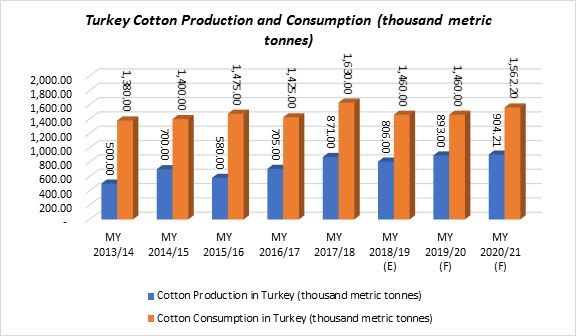 There are some 550 working cotton gins in the country—most of them privately owned—with the most common being roller gins. However, the construction of new saw gins has been boosted due to increased machine harvesting in the country. Agricultural cooperatives and private groups have started investments in the new saw gins in the GAP region. The average ginning rate of the entire cotton planting area in the country is around 38 per cent. Pests such as budworm and bollworm are a problem in the major cotton planting areas. The government has banned the use of aerial pesticides. Moreover, the government does not permit planting of genetically engineered crops. 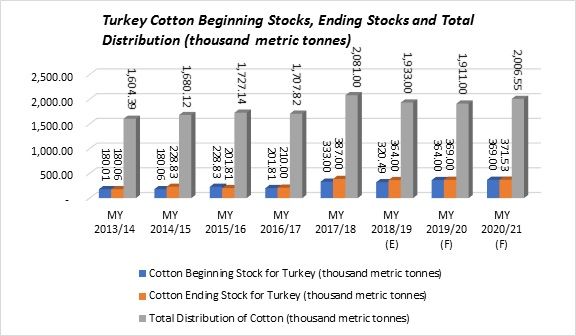 Production Policy: The government of Turkey has a number of policies in place—all meant to boost the country’s textiles and apparel industry. An overview:

2). Turkey, as a part of the Better Cotton Initiative (BCI), is trying to implement and develop sustainable farming practices such as the minimal use of chemicals and water.

Consumption: In MY 2018–19, the cotton consumption dropped by 10.42 per cent to 1,460,000 metric tonnes due to a shrinking domestic market and the downturn. It is expected to increase by a CAGR of 3.44 per cent to 1,562,200 metric tonnes in MY 2020–21 as mills have invested in machinery and technology capable of low-cost production and improved quality products.

Local cotton is sold mostly to mills and the remainder traded on a spot basis at the exchange in Izmir. The Izmir exchange also trades with other regions and countries. It has built a large licensed storage facility with a capacity of 15,000 metric tonnes where cotton growers keep the material for future sales. The ?anli Urfa Commodity Exchange in the GAP region has also built a 20,000 metric tonne capacity licensed storage facility, which started functioning in January 2019. These new facilities will help cotton growers in product marketing and management of early season price pressures and sell later in the season at higher prices.

The rapid growth in the number of shopping malls with clothing and textile stores has advanced the domestic demand of textile products. A rising youth population, migration to urban areas and tourism too have contributed to domestic consumption. Manufacturers are constantly increasing the number of stores in overseas markets such as the Middle-East, North Africa and Europe. 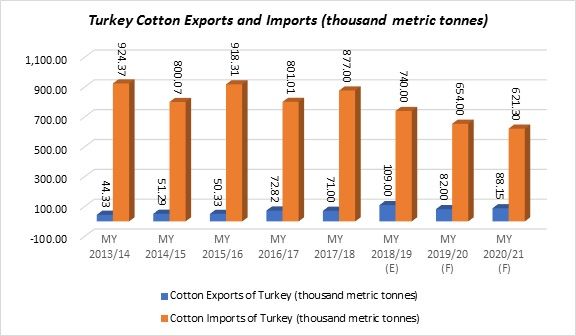 The total US registered cotton exports during the first six months of MY 2018–19, plus reported export commitments to Turkey (as of March 7) was 219,000 metric tonnes, down 36 per cent compared to the same period of the previous year. 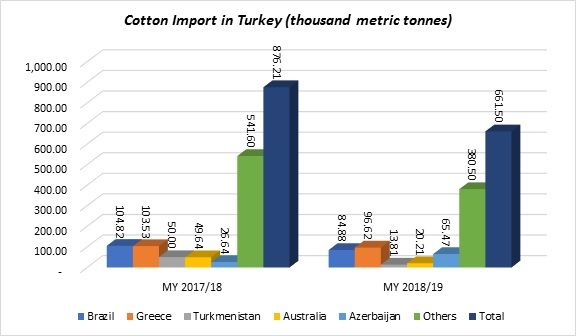 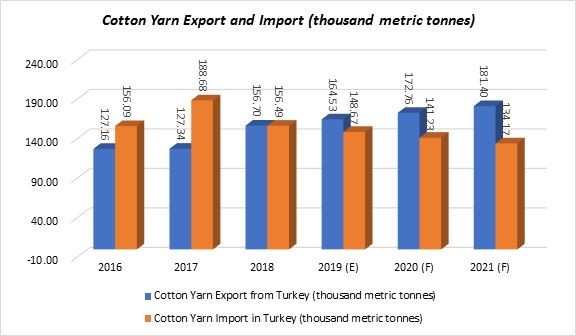 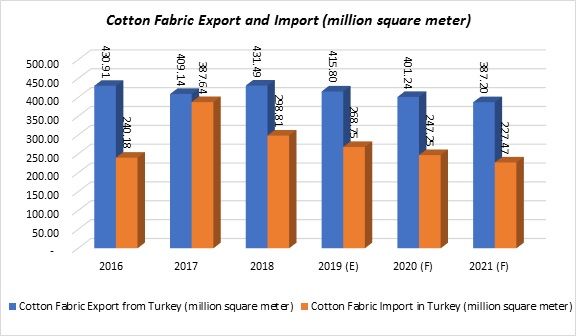