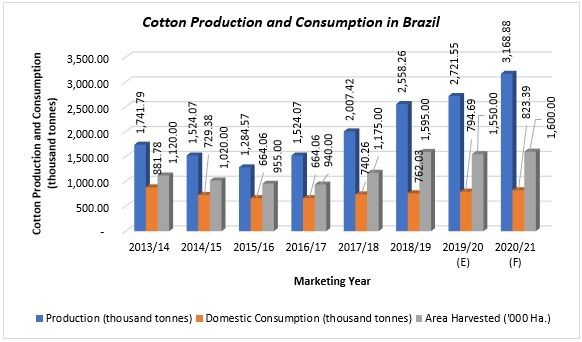 Due to favourable backdrop of external market demand along with strong global prices and Brazil’s internal production capacity, farmers chose to put aside the maximum planted and harvested area this season.

The cotton harvested area in Brazil was 940 thousand hectares in MY 2016/17 and moved up by 69.68 per cent to 1,595 thousand hectares in MY 2018/19. This massive growth has been driven by ample availability of convenient land for cotton farming and favourable climate along with strong international demand and high prices all over the globe. Cotton producers have been flourishing not only from rising global prices, but also the relatively weak domestic currency, the Real.

Total harvested area of cotton increased by 35.74 per cent in MY 2018/19 over the previous year and is expected to surge slightly to 1,600 thousand hectares in MY 2020/21 with a CAGR of 0.16 per cent from MY 2018/19. The slight drop of estimation of harvested area in MY 2019/20 was based on several factors. Producers expected that global cotton prices would remain modest due to adequate global supply. Brazil had a bumper crop in that season, with a massive exportable surplus, which carried over into the next export season.

Planted Area and Production Forecast by State for 2019/20

The cotton producers in the Mato Grosso are expected to finish the season with the plantation of more than a million hectares. They have expanded production in the state with the help of municipalities who usually plant corn or cover crops to follow up the first season of soybean crop. The major part of the cotton planted in Mato Grosso is a second season crop, after soybeans. The harvesting of cotton usually starts in June but picks up in July with the bulk of the crop picked in August and September. 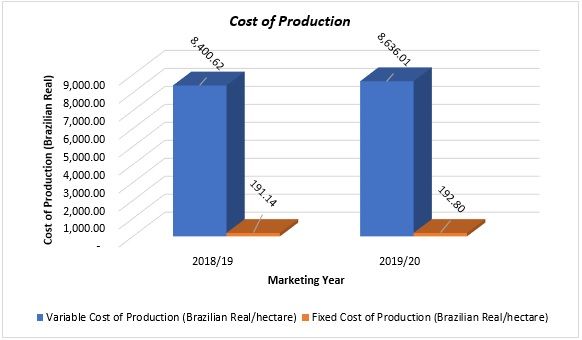 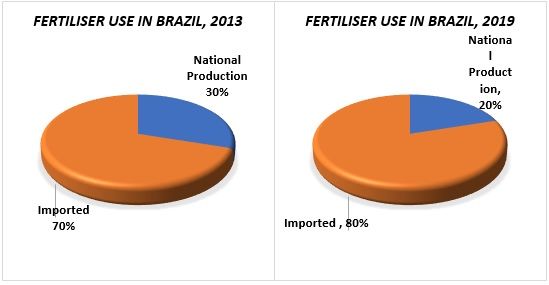 The local cotton consumption of the country is expected to grow at a lower rate as Brazil’s economy is anticipated to grow by 2 per cent only in 2020. This slow growth is expected to impact manufacturing and consumer sentiment.

The Brazilian Association of the Textile and Apparel Industry (ABIT) has projected the growth rate of 0.5 per cent in domestic textile production and 1.5 per cent in retail. 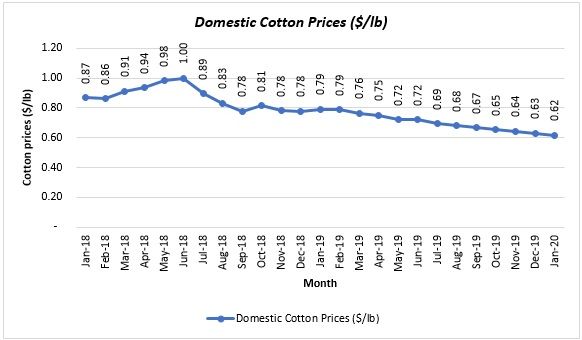 The price of cotton has been showing downward trend from the beginning of this calendar year. This trend is expected to continue in the second half of the year, in line with the drop in global market prices and massive harvests in the US and Brazil. The US inventories are expected to reach a 12 year high in MY 2019/20 season. Meanwhile, global demand is also decelerating amid a global economic slowdown.

The cotton exports of the country are expected to move up to 1,778.08 thousand tonnes in MY 2020/21 from MY 2018/19 with the CAGR of 16.66 per cent. The Brazilian cotton farmers’ sales contracts for around two thirds of their production and significant crop of this season, have boosted the cotton export despite an environment of moderating global prices. The massive exportable supplies of current season and consistent strong cotton demand from China have also supported the cotton exports of the country.

Usually the harvest of current marketing year gets exported in the next marketing year. Approximately 70 per cent to 80 per cent of MY 2018/19 crop has been commercialised for MY 2019/20 delivery. Hence the current drop in cotton prices would not have notable impact on volumes shipped next season. The Real also have been devaluating due to deep economic recession and sluggish economic recovery that began in 2018. 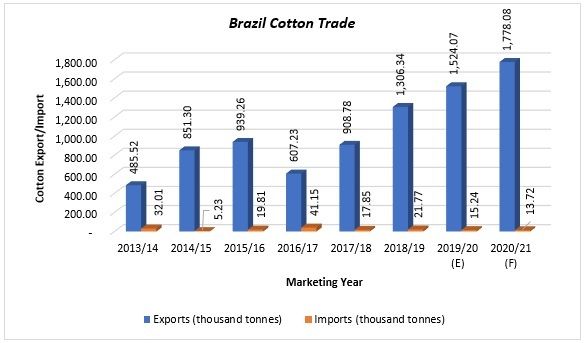 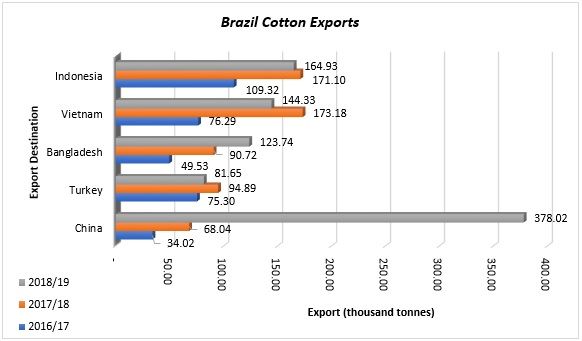 ?     China became the leading buyer of Brazilian cotton despite Vietnam and Indonesia being the top leading destinations for Brazil’s cotton in MY 2016/17. In 2018/19, the Brazilian cotton imported by China increased to 3.62 million metric tonnes from the 0.73 million metric tonnes in the past. This trend is expected to continue in the future as the Ministry of Agriculture, Livestock and Supply (MAPA), the Ministry of Foreign Affairs (MRE), the Brazilian Agency for the Promotion of Exports and Investments (Apex), and Brazilian Cotton Exporters association (Abrapa) has planned to open a permanent office in Asia in order to increase promotional efforts for exports.