COVID-19: An Opportunity for Revival of Philippines Textiles & Clothing Industry

After the outbreak of COVID-19, Philippines is upbeat that foreign buyers would continue to look at it as a source for clothes to be sold. And with the proposed passing of Corporate Income Tax and Incentives Rationalization Act (CITIRA) into law, new investments into the garment factories are expected to rise.

Philippines is a significant supplier of apparels all over the world. For the export earnings, the garment manufacturers of Philippines are looking at a flat growth this year as the COVID-19 pandemic has impacted the supply of raw materials for production. According to the Philippine Exporters Confederation Inc (Philexport), the export earnings of the garment manufacturers of the country have increased by 1 per cent only. According to data from the Philippine Statistics Authority, the country’s garment exports were valued at $906.289 million last year. Currently, the country’s apparel production has almost come to an end due to shortage of raw materials from China, Korea, Taiwan and other Asian countries.

Robert Young, trustee for the textile, yarn and fabric sector of Philexport and president of the Foreign Buyers Association of the Philippines, says that they don’t have domestic sources of fabric, textile and accessories. They are dependent mainly on the import of these items. After the outbreak of COVID-19, Young is upbeat that foreign buyers would continue to look at Philippines as a source for clothes to be sold. Players are also hopeful about new investments into the garment factories. Textiles and clothing manufacturers expect that investors would prefer the country once the proposed Corporate Income Tax and Incentives Rationalization Act (CITIRA) is passed into law.

CITIRA or the second package of the government’s tax reform programme would gradually bring down the corporate income tax rate to 20 per cent from 30 per cent, and rationalise fiscal incentives given to firms. He also said that the players expected more orders based on new factories with country’s advocacy on CSR (corporate social responsibility) and the improvement of the conditions of the factories. According to Young, US remained the country’s biggest market for garments this year. They also hope to add footwear and garments in the new US GSP that will come by December 2020. Currently, only the gift-wares are included in the US GSP.

A 10-year plan has been made by the Board of Investments to nourish links between government, industry and the private sector and establish a dedicated trade office. They also have a plan to abolish the proliferation of used clothing imports from North America and Europe that compete with domestic suppliers.

Other strategies such as better integration of the garment and textile sectors, allotting capital and land to increase production, encouraging the purchase of new equipment and providing fiscal incentives to manufacturers through lower value-added taxes and reduced power rates have been included in the plan. The plan also advocates management of infrastructure gaps and logistical bottlenecks, investments for product development and marketing, subsuming loom operations into the school curriculum and cleaning up the textile value chain by requiring the registration of chemicals and substances.

As per the plan, free trade agreements and the country’s Generalized System of Preferences status would help the country to achieve the status as one of the top 10 global garment supplier between 2026 and 2029. Textile exporters would achieve an annual export growth of 45 per cent for the period of three years.

Philippine garment exporters are pushing the local textile and garment industry to address the demand for personal protective equipment (PPE) and face masks amid the threat of COVID-19 pandemic. According to Young, the country’s textile and clothing industry is trying to become self-reliant as they are currently dependent on import of all the things to operate their garment factories.

Young said that the COVID-19 health crisis has impacted the garment orders with 50 per cent decline. Consumers are also not expected to immediately shop for clothes right after the lockdown is lifted. Young said that the garments industry may recover from the impact of COVID-19 in 18 months at the earliest. The country’s players could have been supplied if Philippines had factories nearby. Young said that after the crisis, garment retailers would focus on selling their remaining inventory, adding that consumers will likely be more conservative in buying clothes. Recently 50-70 per cent of orders were cancelled by buyers.

To revamp the country’s textiles and clothing sector, internet and manufacturing technology capabilities must be improved, according to Young. Most of the time, the signals remain poor, especially in the provinces. The government must work upon the internet speed because this is really vital. In addition, he recommends upgraded factory machinery to boost the efficiency and free trade agreements (FTA), especially with the US. According to Young, selected goods such as garments, apparel and wearables, can enter the US tax-free market. 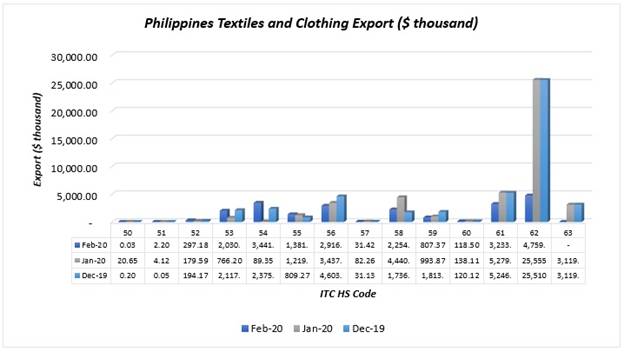 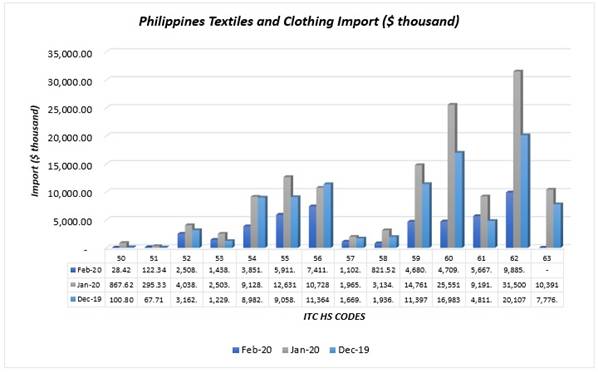