Awarded one of the FabricLink Network’s Top 10 Textile Innovation Awards for 2019, a promising innovation by Bolt Threads is a new sustainable leather solution. The new organic fabric is grown from the filament-based root structure of mushrooms, mycelium. Bolt Threads’ mushroom root-based Mylo material looks and feels like soft and supple leather.

The Root of The Leather Problem

Leather has been part of our textile supply chain for centuries. Paintings and artifacts in Egyptian tombs indicate leather was a present material even in 5000 BC hundreds of years ago. When indigenous communities lived off of the natural land, animals were hunted for food and their hides used for shelter, transport, and wearable warmth in winter. The spread of industrialisation in the 18th and 19th centuries increased its demand. And the modern manufacturing technology of the 20th century has solidified its popularity and established it as a staple material in almost every product category.

But the status of leather as a “sustainable” textile is persistently debatable in the eco-fashion community. Foes argue that animal products are neither ethical nor eco-friendly thoughtful. Animal lover or not, it’s hard to disprove the livestock industry’s culpability in global deforestation and global warming. Still, as long as the meat is on our plates, friends of the material argued that it’s preferable to use the remnant skins of animals in clothing instead of wasting it. Moreover, leather goods are known to be treasured and last a long time. They are an investment textile, leather is not exactly fast fashion. 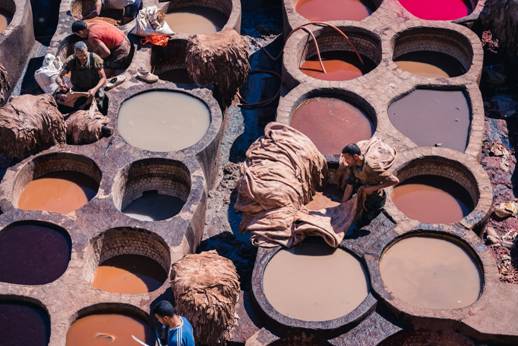 As an alternative and a cheaper one at that, faux leather was developed out of synthetic plastic polymers and/or rubbers and oils. But its production can be harmful, jeopardising the health of the humans who make it, and the environment. It also doesn’t biodegrade, whereas an animal skin jacket might decompose back into the earth as it's from organic textiles. Although this argument is perhaps void when one considers that leather is treated and coated heavily with likely unsafe materials. Also, the production of natural leather requires lamentably huge amounts of water.

The Root of The Leather Solution

With leather’s future in question, as the consequences of an expanding meat and leather fashion industry show themselves rather clearly, new origins of leather-like material have surprised the textile sourcing world. Such innovations include pineapple leather and cactus leather. And now, the celebrated textile innovation and material solutions company Bolt Threads has realised and invented a solution made of mushrooms.

Actually, it’s made of mushroom root or mycelium. Mycelium grows in a forest’s soil. Its growth structure entails a vast network of tiny threads, fine white filaments, that interweave and self-assemble themselves into “a 3D matrix that can spread for miles” according to Bolt Threads. This root current helps recycle organic matter on the forest floor into nutrients for plants and trees. 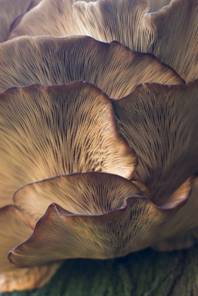 It’s called Mylo, and it is grown on renewable, organic matter. Bolt Threads precisely controls growth conditions like temperature and humidity to encourage the mycelium to grow upward and assemble into an organised mat of interconnected cells. The careful control of its environment allows Bolt Threads to manipulate the mycelium’s growth and control the final material’s properties including thickness, shape, and more. The final product is created by combining mycelium cells with a substrate of corn stalks and nutrients. Within about 10 days, the cells grow into the substrate, which can be cut into almost any size.

The material looks like hand-crafted leather and shares leather's warm touch and suppleness. It’s durable and abrasion-resistant and said to have better moisture management properties than synthetic leathers. But unlike animal leather, it can be produced in days or weeks, compared to the years and resources required to grow and obtain sources of animal hide. Thus further lessening environmental impact. Additionally, it requires none of the toxic chemicals used in the making of synthetic leathers with polyurethane or PVC coatings. Bolt Threads also avoids toxic solvents like DMF (dimethylformamide). 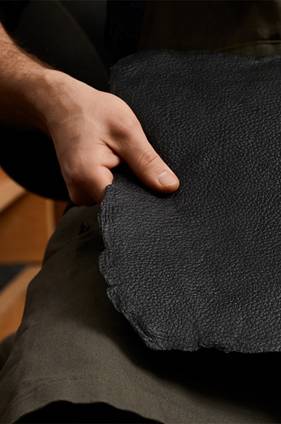 This may well be a promising alternative to leather, and an exciting option for eco- or animal conscious shoppers.

In 2018, sustainability-minded and leather-eschewing fashion designer Stella McCartney produced a prototype of her iconic Falabella bag out of Mylo. It premiered at the “Fashioned from Nature” exhibit at London’s Victoria & Albert Museum as an example of the potential eco-conscious future of high fashion, luxury leather goods. McCartney also collaborated with Bolt Threads for the launch of their first fabric revolution, a spider silk Microsilk, which debuted in 2017.

Bolt Threads has made noteworthy strides by using proteins already existing in nature to create fibres and fabrics with both practical and revolutionary uses. They aim for fabrics to be consistently high quality yet more biodegradable and harmlessly replicable.

Their fabrics are all-natural, grown to order, and use substantially fewer resources than traditional textiles.

We hope to see more of these sustainable fabrics and natural textiles in use by apparel manufacturers and designers of sustainable fashion. As well as their extensive presence in trade shows in the united stated and the rest of the world.