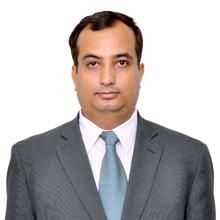 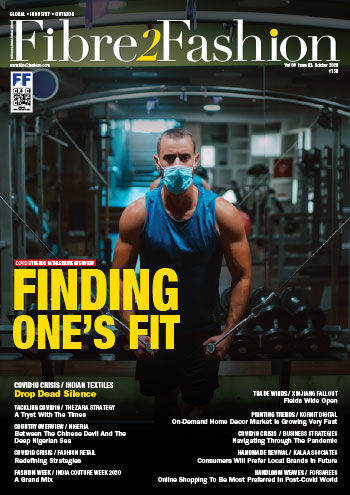 Sales and EBIDTA for the top Indian textile companies have dropped in Q1 FY21. Domestic demand is expected to pick up in the festive season ahead.

The covid-induced lockdown led to closure of factories, resulting in dropping utilisation and hence significant impact on sales and profitability, according to the Wazir Textiles Index (WTI) findings on the market performance of the sector for Q1 FY21. 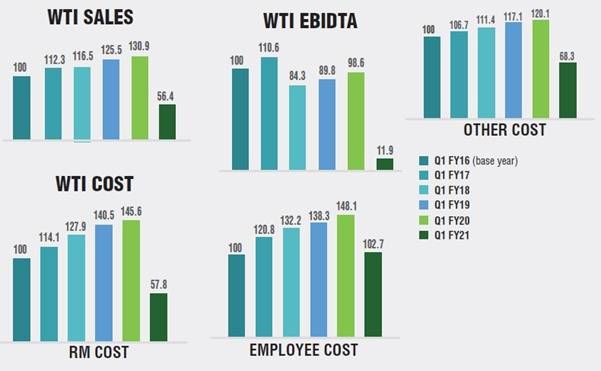 Due to the impact of worldwide lockdown induced by covid-19, there is a major decline in trend across all the indices. Figure 2 is a graphical depiction of the same. 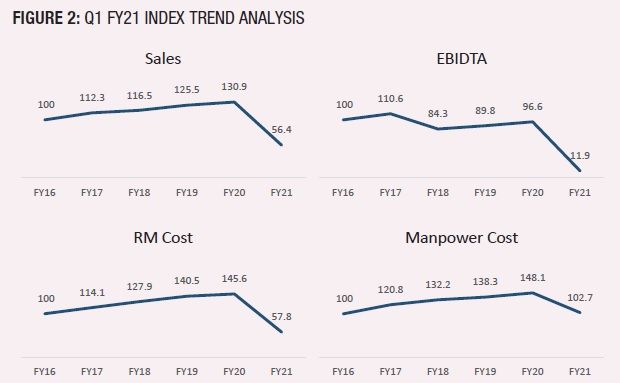 Data Source: Ministry of Statistics and Programme Implementation (Base Year 2011–12)

Data Source: Ministry of Statistics and Programme Implementation (Base Year 2011–12) 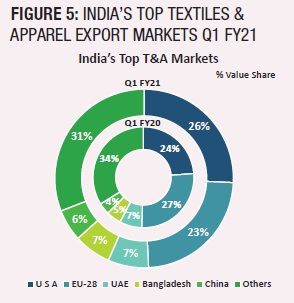 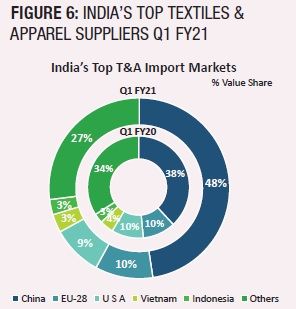 The textiles & apparel (T&A) exports in Q1 FY21 stood at 3.9 billion, showing a dip of 56 per cent from Q1 FY20. The exports of filament and apparel witnessed the highest dip of 67 per cent and 65 per cent, respectively. The US, EU-28 and the UAE remained the top export destinations for India’s T&A products with a combined share of 56 per cent.

China’s imports to India increased by 10%

India’s T&A imports stood at $1 billion in Q1 FY21, recording a decline of 49 per cent over that in Q1 FY20. The imports of fibre and yarn experienced the highest decline of 63 per cent and 59 per cent, respectively. The imports of PPE kits and other related products are majorly from China which resulted in 10 per cent increase in China’s exports to India in Q1 FY21 as compared to Q1 FY20.

Imports of US declined by 50%

The US imported T&A products worth $23.9 billion in Q1 FY21, out of which $13 billion was PPE imports. Excluding PPE, the imports showed a decline of 50 per cent as compared to that in Q1 FY20. In YTD (Jan-Jul) analysis of US apparel imports, the country has shown a decline of 31 per cent in its imports whereas analysing the monthly imports from January to July, US apparel imports are on a recovery track after hitting the lowest in May.

The Indian T&A industry showed a significant decline in terms of overall sales and EBIDTA levels in Q1 FY21. The performance and exports were already bleak but the economic lockdown due to covid-19 in March has further weakened the performance. However, towards the end of the quarter, exports picked up as demand is returning back in the US and EU. In the domestic market too, demand is expected to pick up in the festive season ahead. Hence, industry needs to accordingly gear up to tap the demand.

This article was first published in the October 2020 edition of the print magazine.