The Made in China 2025 plan, announced in 2015, aims to transform China's industry and shift more of its resources into higher value-added manufacturing. With China's shrinking working-age population and declining labour productivity, automation or relocation of industries remain the most likely options. Both will have a major impact on global value chains.

Global supply chains have undergone tremendous change in the last three decades. From China being an agrarian economy in the last 1980s, to becoming an industrial giant, supply chains in several key industries became increasingly more concentrated. In an attempt to gainfully employ its large population, China invested heavily in labour intensive sectors like textile and apparel, footwear, consumer electronics, toys and many other such sectors. In 2019, a total of 38 million small and medium enterprises in 2019 (Source: Statista) contributed to 60 per cent of its GDP, 70 per cent of patents and 80 per cent of the overall employment in the economy. Industrial development in China moved millions out of poverty and was a classic textbook example of starting with low-skilled manufacturing to begin its journey towards greater economic success.

The scale of China’s textile and apparel sector, the whole world is aware today, is no mean feat. China’s overall textile and apparel exports went from USD 53 billion in 2000 to USD 305 billion in 2019, raising its share in global exports from 13.4 per cent to 34.4 per cent. In this process, China caused the world to depend heavily on it in various stages of the textile and apparel supply chain. In both woven and knitted fabrics, China contributes almost 50 per cent of global exports and actually produces an even larger share, as it consumes a major proportion of it. At its peak, China also had around 50 per cent share in knitted apparel and close to 30 per cent share in woven apparel. Now, textile and apparel industry is generally understood to be labour intensive, but yarn and fabric making has increasingly become more mechanised than apparel/cloth making. China’s rise in more labour-intensive sectors such as the latter was the cornerstone of its economic development plan for the last two decades.

In 2015, the Chinese administration announced its plan for further industrialisation for 2025, named Made in China 2025, which took the global economy by surprise.  However, what the plan envisaged and its timing could not have been better. China’s labour costs have started to rise recently and with tough competition from neighbours such as Vietnam, Bangladesh, India, Pakistan and Cambodia, the largest exporter stood to lose its competitiveness rapidly in textile supply chain. China’s textile industry was also becoming less profitable, perhaps because of high labour intensity and reducing margins due to increasing competitiveness.

The new plan for China’s economic development involves tremendous investments in high-tech manufacturing to decrease China’s share in lower value-added sectors, and enable China’s movement into higher value-added production. Industries like electronics equipment, new energy and energy saving vehicles, automated machines and robotics, aerospace equipment, medical equipment and ocean engineering equipment among others are the key focus of this plan. China’s move to focus more on these sectors and less on lower value-added manufacturing is somewhat apparent from its changing export basket. This note analyses these trends and speculates on the possible impact on the textile and apparel value chain while China attempts to diversify with such aggression.

China’s exports to the world may not have changed dramatically over this decade, but early trends suggest, China’s reducing share in apparel exports and manufacturing was more likely part of the plan. And this was not limited to just textiles, but exports of lower-value components in the iron and steel supply chain as well, and probably many other sectors. The below graphs try to elucidate the point showing China’s exports in some sectors of particular interest here.

The first graph (Figure 1) shows China’s exports of both upstream and downstream sectors of the textile value chain. Leaving fabric exports aside, which involves more mechanised production, exports have fallen sharply in the last eight years. Particularly, apparel exports which have a larger share in China’s exports, have fallen dramatically. The more recent fall in apparel exports is probably attributable more to the increasing preference to shift away from China (demand driven) but there is very well a secular shift on the supply side as well. And this is not just true for textile and apparel sector in China. China’s iron and steel exports have also seen an average of 7.7 per cent decline since 2015, declining for 5 out of the 6 years. China’s recent call to remove rebate on steel exports except CR Coil and GP Coil (higher value-added products and greater demand in several downstream industries), indicates similar trends in the iron and steel sector. China still remains the largest exporter of crude steel, but the decision to end rebates might mean better market competitiveness for exports of other countries. 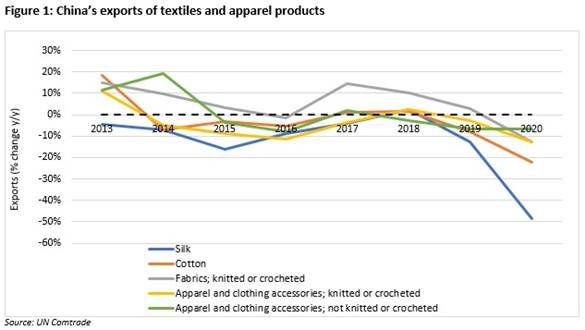 The other figure shows categories that China has specifically focused on, in its development plan for 2025. Exports of automated machinery and robotics have been rising (peak at more than 30 per cent growth in 2017), however it remains a small part of China’s exports. Medical and surgical equipment exports rose sharply due to COVID-19 pandemic, but the rise in growth was visible even before 2019 and has only become more prominent now. China’s rising exports of aircrafts and parts is reflective of its aerospace ambitions and plans to compete with the likes of Boeing and Airbus in the years to come. China’s electronic equipment exports are also expected to remain elevated as semi-conductors remain a crucial element of the electronics industry.

As reflected from the exports trend, there could be two possible aspects underlying China’s economic plan: 1) to shift domestic resources from low-value added manufacturing, possibly by shifting those industries to other LDCs by investing abroad, or reducing presence in them altogether or 2) to mechanise or automate manufacturing and save costs in sectors which are still considered strategic. Such a policy appears reasonable for two reasons. China’s ageing population meant lower pool of working-age population, which would have hindered further expansion. So far as development is concerned, this is driven largely by the western examples of economic prosperity, particularly Germany and Japan. Secondly, and consequent to this, China’s labour productivity has shrunk to decadal lows. Shrinking working-age population led to increasing labour costs, while declining labour productivity growth meant lower growth in GDP or revenues, squeezing the profit margins of Chinese enterprises. In such a scenario, the outlook and the industry structure that Made in China 2025 proposes and aims to achieve is the most optimal to evade a crisis of epic proportions.

Another aspect here which is typical of development paths is using the accumulated surplus to invest in more capital-intensive production. While China’s industry had an increasing share of high-tech manufacturing, in 2010, its industrial competitiveness was ranked 7th globally behind Japan, Germany, United States, South Korea, Taiwan and Singapore (UNIDO Competitive Industrial Performance Index, 2012). Using increased investments in R&D and technology, China has managed to take a giant leap forward here as well. Cut to 2018, and China’s industrial competitiveness is now ranked 2nd, only behind Germany. China largely appears to be following Germany’s Industry 4.0 plan and aims to become a global leader in the sectors of tomorrow.

This has tremendous implications on how the textile and apparel supply chains of tomorrow will look like. Speculations that Vietnam will gain tremendously from the shift in trade flows, and growing global aversion to China, seem highly likely but the relative scale difference between China and its competitors in textile and apparel sectors could slow this shift. Currently, Vietnam also faces challenges in terms of its largely unskilled workforce, lower quality of infrastructure and less capital-intensive nature of production. On the other hand, China may not completely give up its share in many segments of textile value chain but merely increase margins by technological upgradation or relocating them to other countries, whichever is more convenient. China’s rising FDI flows across the Belt and Road Project, particularly in regions where labour is abundant and cheap is symbolic of this. In their recently published paper, Altenberg et al, 2020 show that China’s textile and clothing industry FDI grew tremendously post 2013, with a total stock at USD 10 billion in 2018. Until 2014, Southeast Asian nations received the largest share (56 per cent) of this stock, however post 2013, Vietnam, Cambodia, Laos, Myanmar and Thailand attracted heavy FDI flows from China’s textile and clothing firms and their cumulative stock reached USD 1.7 billion. Some African nations such as Ethiopia and Egypt have also been getting large investments recently. This increase in FDI flows has also led to increase in textile and clothing exports from these countries.

However, trends until now point towards a larger preference for use of technology rather than moving out of China. There is evidence that companies in China have not resorted to relocation on a large scale, as a solution to its rising challenges, but instead chosen technological upgradation, which reduces labour costs. A 2017 survey report by Centre for New Structural Economics in China  shows that only 10 per cent garment manufacturers chose relocation as one of its top three strategies vis-a-vis 42 per cent firms who chose technology upgradation. Over past few years, value of M&A deals involving Chinese companies as buyers has also risen tremendously. Value of these deals rose to USD 130.9 billion in 2018 from just USD 1.53 billion in 2007, indicating an early recognition of China’s technological needs and M&A as a way to make Chinese companies get access to global best-practices.

From here, trade shifts to other sourcing locations depends heavily on what happens to the industry in China. Should China manage to heavily automate its apparel production lines and replace its now costly labour, gains to other countries from the geo-political tensions will be limited. This is perhaps the only way China will be able to maintain cost competitiveness. Also, China’s economy now will have to depend more on global demand (exports) as its domestic consumption has begun to taper, so resolving the conflict sooner is in its interest. China has an edge in terms of network and scale economies in the textile supply chain and is years ahead of its competitors when it comes to infrastructure. A major ramping up of infrastructure in countries like Vietnam, Bangladesh, India and possibly Ethiopia will be a daunting task, and can only facilitate trade in the long term. Even then, supply chain directions would somewhat be determined by the cost-differences of high labour-intensive production vs a more automated one in China. It will depend to a certain extent, on whether China decides to shift a large part of its labour-intensive production to other cheap-labour countries, so that other economies have a chance to participate better in the textile value chain. Both options however will keep China equally relevant as today.

Altenberg Et Al’s paper shows that however, some large vertically-integrated companies, are perhaps going for a third option, a middle ground between relocating and automating. It provides examples of Shenzhou and Esquel Groups in China, which keep their fully automated base facilities at their native locations in China, while also doing low-value manufacturing in countries like Malaysia and Vietnam respectively. This solution makes integration of Chinese firms, if not China, in global value chains even more intricate. Which of the three outcomes will dominate the textile value chain going forward, will largely depend on China’s strategy but also on the response from its competitors. Heavy infrastructure spends and investments on upskilling of workers will remain pre-requisites to creating their niche in the global market.