Producer prices in China rose by 9 per cent in May-21 due to steep rise in prices of copper, iron-ore and crude oil. Partially exported to trade partners, China's rising factory gate prices have re-ignited global inflation worries. However, rise in global textile prices remain relatively muted but are expected to continue due to rising demand-supply gap.

The strong recovery of global demand and resultant supply pressures on the factory production has kept input prices high across the globe. Global PMI released early this month showed that input prices were growing faster than output prices. Core industrial inputs such as copper, iron ore, steel and aluminum have all seen prices rising to historical levels. Such pressures on the textile industry seem muted, however, prices continue to rise there as well, both due to supply constraints as well sharp rise in consumption demand.

China, known as the world's factory, has seen continuous rise in factory gate prices, a measure which reflects input costs to all industries. Producer Price Index (PPI) in China saw a 9.0 per cent y/y rise in May-21, the highest in 12 years, compared to a 6.8 per cent y/y rise for previous month. Majority of this rise was a result of increasing demand and supply gap for raw materials like copper, iron-ore and rise in global crude oil prices. Prices for copper have eased in June from the peak of May-21 but remain 70 per cent higher than last year (LME Copper). Crude oil prices however have risen materially since May. Brent crude prices touched USD 73.29/barrel this week relative to an average of USD 66.40/barrel in May-21. OPEC is expected to increase production in July, and the price trajectory will only be determined by how both demand and supply pan out going forward.

Higher input costs would either mean absorption by firms resulting in lower margins or a pass through to the consumers, keeping margins intact. Domestic consumer price inflation in China was just 1.3 per cent in May-21, on the back of subdued domestic demand and renewed COVID-19 outbreaks in some parts. However, rising producer prices inflation in the Chinese economy has started to spill over to the global economy. There are indications that Chinese exporters are sending goods after marking-up for the high raw material costs. Some of the anecdotal evidence comes from Reuters, but more concrete information coming from China's exports statistics for May-21 reveals the extent of such price transmissions. Many of the key industrial inputs such as petroleum products, fertilisers, rare earth minerals, integrated circuits, steel products and ships have seen rising prices, and as much as 90 per cent rise in export prices since last year.

Table 1: Volume and Value Comparison of China's Exports for May-21 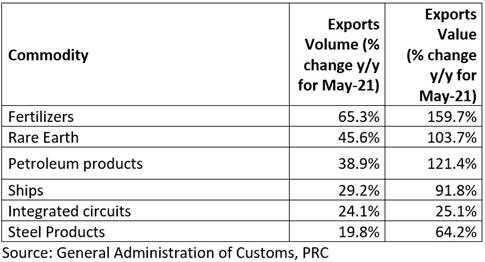 Inflationary impact in other economies

Consumer prices in these economies have also been inching higher but not as rapidly as prices of industrial inputs, giving some respite to policymakers. US CPI inflation for May-21 came at 5.0 per cent, rising from 4.2 per cent in Apr-21. CPI inflation in the EU is expected to be at 2.0 per cent in May-21 up from 1.6 per cent in Apr-21. Demand recovery appears to be much sharper in the US than in EU, as the latter has been more cautious, and US stimulus payments have helped spike demand to a great extent.

Prices in the Textile Supply Chain

The Cotton Market Update for Jun-21 by USDA, projects China's imports of cotton to reach a seven-year high. This is driven by sharp rise in China's cotton consumption, almost 7-milion bales higher than last year, accounting for more than half of the gain in global cotton demand.  Cotton prices have largely stabilised due to supply catching up with demand, as USDA cotton export estimates for MY 2020/21 for all major exporters have been raised for Jun-21 relative to last month. TexPro Cotlook A Index price was at 93.5 cents/pound for May-21, only slightly lower than the previous peak in 2018. Although cotton prices are not at the highest-ever, but pressures from the sticky supply-side exacerbated by congestion at major ports will keep prices elevated. China is expected to import a large part of its consumption which could create demand pressures going forward, but the reason cotton prices have recently stabilised is that US cotton production has been strong due to adequate precipitation in Texas.

While cotton prices have stabilised since Jan-21, cotton yarn prices have continued to rise as relaxations in the US and EU economies have translated in strong demand for textile raw materials from China. China is the largest supplier of both cotton and synthetic yarns globally. FOB prices of cotton yarn in China have not only reached historical highs but are still reflective of transmission of input price inflation from China to its trading partners.

Crude oil prices have risen sharply in the last two months from USD 63.8/barrel in Mar-21 to USD 66.4 in May-21, to more recently at USD 73.29/barrel this week. China being the largest supplier of polyester yarn, price rise in crude will also most likely reflect in prices of polyester yarn used by China's trading partners. Price of China FOB exports of 100 per cent polyester yarn on TexPro are shown to be significantly higher than last year. At USD 1.65/kg in May-21, it was 33.1 per cent higher than last year, and remains elevated in June as well. However, they are well below the last peak of USD 2.21/kg in 2018.

China's large share in supply as well as demand for many of these products renders it key to price stability. In addition to input costs in China, its consumption of yarn has also helped kept global yarn prices elevated. Chinese yarn imports have risen dramatically over the past years (72.6 per cent higher in Apr-21 over previous year) impacting yarn prices in many of its key supply markets, one of them being India.

The impact of China’s rising producer prices on global textile prices has been relatively muted compared to other industries. However, as the sector was already under severe financial strain, even a slight increase in input costs could mean lower margins and increasing financial burden for garment makers if demand in the global economy recovers slowly going forward.