A study was conducted to understand the clothing purchase behaviour of 120 rural families staying in the sub-mountainous area of Hoshiarpur district, Punjab, to understand the factors which influenced their buying decisions. The study concluded that factors like personal, economic, psychological and socio-cultural played a major role in consumer behaviour.

Clothing plays a very significant role in the development of an individual's personality at all stages of life. It provides a means of self-expression and aesthetic enjoyment to the wearer. It is one of the means of achieving social and economic status in a society and fulfils the comfort and luxury aspects of human wants besides being a necessity. So, in today's fashion-conscious society, it becomes important to keep in mind the need, desire and personality of a person who is going to wear the clothes (Purwa, 1996).

Globalisation, growing competition, and short fashion cycles are affecting buying behaviour of consumers. Consumer purchasing behaviour is the sum of consumer's perspectives, inclinations, goals, and choices with respect to the purchaser's behaviour in the market when buying a product.

Nowadays, stars are being treated as role models. Individuals copy the dressing style of their favourite stars. This makes a great effect on the purchasing behaviour of the people and has an incredible effect on perception of consumers while selecting any product (Khatri, 2006). Today, with the increased consciousness about various mass media communication channels, people are becoming more aware of current fashion trends and consequently shell out more on clothing than traditional times. Therefore, this study has been conducted to investigate the role of various factors affecting the clothing buying behaviour of rural families.

A study was conducted in sub-mountainous area of Hoshiarpur district. Stratified random sampling technique was used to select the villages. Two blocks from each tehsil and then three villages from each block were selected. A sample of 10 respondents(families) were selected from each village. Thus, 30 respondents (families) from each block were selected, making it a total of 120 families. A snowball sampling technique was used to select the families. An interview schedule was developed for obtaining relevant information regarding factors such as personal, economic, psychological, and socio-cultural affecting the buying behaviour. The data obtained through the interview were coded and tabulated. Frequency and percentages were computed to interpret the results in a comprehensive manner.

Consumer buying behaviour refers to the actions and decision-making process of people who purchase goods and services for their self-consumption. Buying behaviour is influenced by four major factors i.e personal, economic, psychological and socio-cultural. Personal factors may differ from person to person, thereby producing different perceptions and consumer behaviour. Amongst the personal factors age is an influential factor. The buying choices of youth differ from that of middle-aged people. Elderly people have a totally different buying behaviour. Another important personal factor is income. Higher the income, higher the purchasing power of consumers. When a consumer has high disposable income, it gives him more opportunity to spend on luxury products. Whereas low-income or middle-income group consumers spend most of their income on basic needs such as groceries and clothes.

Occupation is the third factor. A person tends to buy things that are appropriate to his/her profession. Data in Table 1 shows that maximum respondents (83.33) were of the view that age is always the most influencing factor as individuals plan mode of purchase, colour, texture and number of items according to their age group. Income always influenced buying behaviour of about 72.50 per cent of the respondents. They made purchases according to their income or money in hand, whereas buying behaviour (59.17 per cent) is often influenced by their occupation. Only 22.50 per cent of the respondents were of the opinion that occupation always affected their buying behaviour followed by 12.50 per cent who reported that it sometimes influenced their behaviour.

Similarly, a consumer is highly influenced by the amount of savings he/she wishes to set aside from his income. Data in Table 2 shows opinion of respondents regarding influence of economic factors on buying behaviour. The money that is left after spending towards basic needs of a person is called disposable income. When a person has high disposable income, his purchasing power increases automatically. When there is an increase in disposable income, it leads to higher expenditure on various items. But when the disposable income reduces, the spending on multiple items is also reduced. Family income is the total income from all the members of a family. When there are more earning members in the family, there is more income available for shopping basic and luxury items. Savings of the family in any form often influenced consumer buying as reported by 35.00 percent of the respondents.

Another important economic factor is consumer credit (getting some loans with easy instalments either through bank or other financial institutions) and liquid assets (cash, savings accounts and certain types of investments that may also include jewellery) which were reported by 53.33 and 40.00 per cent of the respondents, respectively. 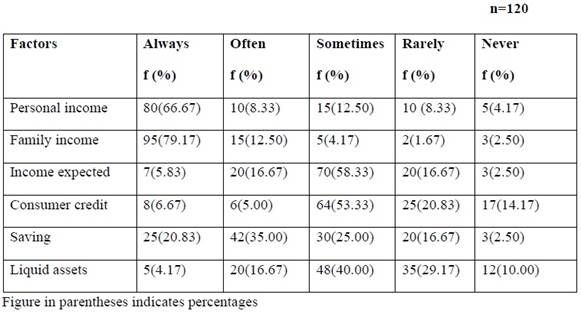 Consumers who have liquid assets tend to spend more on comfort and luxury. Liquid assets are those assets which can be easily converted into cash. When we expect some addition/increase in income, even then the buying behaviour gets affected as reported by 58.33 per cent of the respondents.

Various psychological factors like motivation, perception and attitude were studied to know their influence. 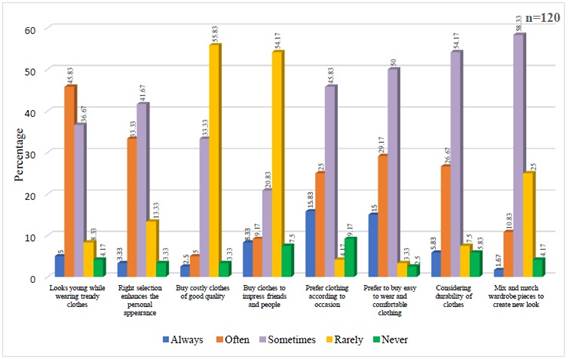 Branded clothes depict status symbol; colour and design selection were the other factors considered by 50.00 and 35.83 percent of the respondents respectively whereas 41.66 percent of respondents sometimes felt that expensive products are better than cheap products. 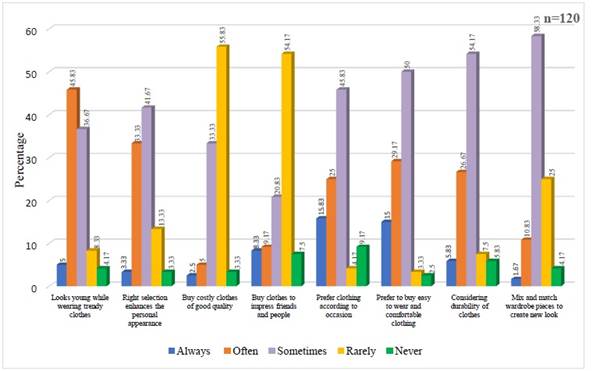 Consumers have certain attitude and belief which influence their buying decisions. Based on this, the consumer behaves in a particular way towards a product. About 46.00 percent of the respondents often felt that they look young while wearing trendy clothes while 41.67 per cent were of the view that sometimes right selection of product (may be clothing) enhanced their personal appearance (Fig 3). Nearly 55 per cent of the respondents rarely bought costly clothes to impress friends. Less than 50 per cent sometimes prefer clothing according to occasion. About 58.33 per cent of the respondents sometimes prefer to mix and match wardrobe pieces to create a new look, while 54.17 per cent considered clothing durability and 50.00 per cent bought easy to wear and comfortable clothing respectively. 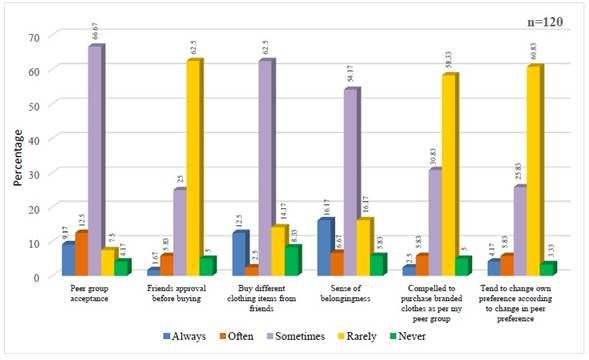 Reference group is a group of people with whom a person associates himself. Generally, all the people in the reference group have common buying behaviour and influence each other. Data in Fig 4 shows that peer group acceptance (66.67 per cent) and sense of belongingness (54.17 per cent) were sometimes considered as major factors that influence buying behaviour of respondents. Sometimes, individual's tendency to buy different clothing items from friends (62.50 per cent) was also given due consideration by respondents. Data in figure 4 shows that 62.50 percent of the respondents rarely got influenced by their friends' approval followed by 58.33 per cent who opined that they were rarely compelled to purchase branded clothes as per peer group. 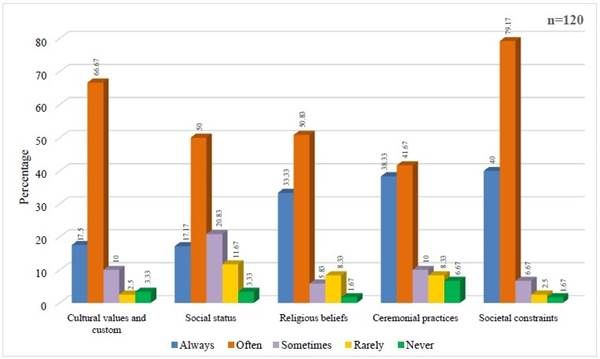 Lifestyle is an attitude, and a way in which an individual stays in the society. The buying behaviour is highly influenced by the lifestyle of a consumer. Data in Fig 6 shows that 72.00 per cent of the respondents rarely choose expensive brands whereas 10.83 per cent never opted for expensive brands. The reason could be their simple lifestyle i.e they do not want to show off or pretend being rich. 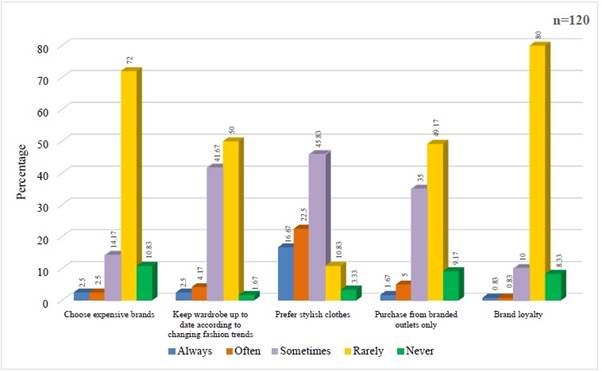 Different personal factors like age and income always influenced the choice whereas occupation of the wearer often influenced his clothing buying behaviour. Similarly, economic factors like personal and family income always influenced the choice of majority of the respondents while expected income, consumer credit, savings and liquid assets sometimes influenced their buying behaviour. Various psychological factors including motivation by attractive displays at the store, peer group acceptance and sense of belongingness were sometimes reported by more than 50.00 per cent of the respondents. Cultural values and customs, social status, religious beliefs, and societal constraints were cultural factors often influencing the clothing buying behaviour.