Employment in US apparel manufacturing yet to breach pre-pandemic levels

Unemployment rate in US was 5.9 per cent in June, virtually unchanged from May, while economic activity and consumption have seen robust growth. Employment gains in US apparel manufacturing remains much slower than growth in demand for US apparel, both domestic and exports. However, this is expected to improve as economic activity gains momentum.

The US employment numbers continue to reflect improvement in the overall economic health. The pace is however slower than overall demand. Unemployment rate for June’21 remained virtually unchanged from the previous month at 5.9 per cent and has been declining consistently since the lockdown phase last year. The labour force participation rate also rose in June’21 after declining in May. Total non-farm employment in the US economy rose to 145.76 million, registering a m/m change of 850,000 in payroll employment, largest since August’20. This also makes Q2 2021 relatively better in terms of employment compared with Q1 2021 and Q4 2020. The recent quarter saw an addition of 1.7 million employed, up from 1.5 million and 0.6 million in the previous two quarters respectively.

The overall payroll numbers however remain 4.4 per cent lower than the pre-pandemic employment in February’20. Also, the job market condition in the US remains highly uncertain across varies across states. In several states, the number of job vacancies has now surpassed the number of unemployed, states which have also now ended unemployment benefits. On the other hand, the nation-wide ratio of unemployment vs job openings was at 1.1 in April’21. Some states evidently are seeing much more rapid increase in job openings relative to the unemployed. Economists, however, contend that ending unemployment benefits could have large economic impact at this crucial point, as not working isn’t solely determined by unemployment aid being provided, but health concerns and decisions to take time away from work could also be significantly important. Market with huge variation--the national job market will take until next year to recover to pre-pandemic levels.

Employment in the US apparel sector also increased in June’21, however much slower than the broad macro numbers. The m/m change in employment in June’21 was just 200 and the total employment stood at 92,200 as compared to 104,500 in February’20. Employment in the apparel manufacturing in US hasn’t yet breached pre-pandemic levels even though domestic sales and exports have grown past those values. Average hourly earnings fell in June’21 to $21.90 from $22.35 in the previous month. This is directly related to the overall demand for apparel in the US and its export demand and as it improves, the average wage and employment might improve further.

Demand for US apparel has remained robust after a slight decline in the month of April. Both domestic sales and exports of apparel have seen strong growth over the last six months, barring couple of months of moderation. This hasn’t converted to a similar growth in employment and wages. As figures 1-4 below show, retail clothing & accessories sales have risen to $25,247 million, which is the highest ever. US apparel exports have also grown to $465 million, now close to the pre-pandemic peak. However, both employment in apparel manufacturing and average wages have been stickier. This could be perhaps because of the above-mentioned reasons for reluctance towards work on the part of potential workers. Assured workplace hygiene, continuous demand recovery and states ending unemployment benefits could perhaps combine to push potential workers to begin working and raise overall employment in the apparel industry. 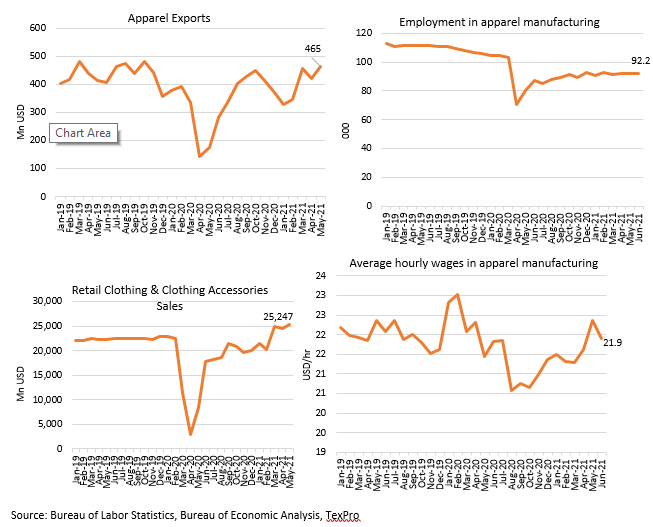 US apparel exports posted a strong growth of 10.8 per cent m/m in May’21 and are expected to grow subsequently as its largest exporters Canada and Mexico have largely contained COVID infections. Mexico is seeing a renewed surge in cases, but the new cases are still only 10 per cent of what they were at the peak in January’21. However, as many states end unemployment benefits, the jump in domestic sales seen in March’21 might be harder to repeat. Although with continuous relaxation in economic activity, growth in domestic sales are expected to remain healthy.

Overall economic scenario for US

US Q1 2021 GDP grew by 2.3 per cent and S&P Global puts growth forecasts at 6.7 per cent and 3.7 per cent for 2021 and 2022 respectively in their June’21 economic update. PMI for US manufacturing in June’21 continued to show strong expansion, registering 62.1, same as that for May’21. Strong expansion for all the three months in Q2 2021 posits an optimistic scenario. The Biden administration might also be planning to implement an infrastructure development plan worth $1.0 trillion, which would require a senate approval. Infrastructure multipliers are generally considered to be much higher than those associated with consumption expenditure. S&P Global estimates that the $1.0 trillion infrastructure plan could lead to a GDP gain of as much as $1.3-1.8 trillion by 2027.1

On the employment front, things might be slow to move in general as discussed earlier for the textile sector as well. S&P Global projects that it might take until Q4 2022 for employment to touch pre-pandemic peak. But with demand recovery continuing and economic activity picking pace, those seeking jobs will be more likely to get one in the coming months.

Household consumption supported by the large stimulus package, has seen tremendous growth during this year. Demand for clothing and other retail goods led overall sales, and with restrictions on movement being removed, services expenditure is also improving sharply. The elevated consumption numbers will help bring much-needed churn in the economy as manufacturing & services activity improves consistently. Activity in leisure & hospitality sector has picked up sharply, and consequently employment and wages in the sector have also risen, indeed much faster than the overall economy.

The prospects for the US economy are generally positive for the coming quarters as Covid infections have largely been contained, and vaccine rollout is now at advanced stages with 47.9 per cent of the population fully vaccinated. The proposed infrastructure bill will provide much needed boost to economic growth while increasing consumption of services will provide greater relief to the most impacted sectors during the pandemic. While, restrictions on international air travel remain, domestic air traffic is expected to improve significantly as the restrictions are relaxed.