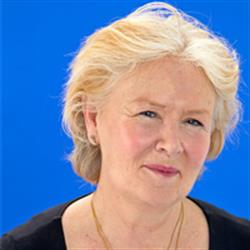 See a big demand for multipurpose clothing
Textile producer Maxxam Textiles, renowned for its pioneering seamless crinkle stretch Maxxam fabric used by dresswear, sports, and swimwear brands, was developed and patented by Rosemary Moore in 1983. Moore talks to Paulami Chatterjee?about her journey that led her to discover the Maxxam fabric, and the brand's newly launched sustainable Eco-Maxxam fabric.

Graduating from RCA to founding Maxxam Textiles. How has your journey been so far?

Gosh where do I start! It's been quite a journey over the last 40 years since I started in the early 80s after leaving RCA. Maxxam fabric is such a popular concept that I learnt a lot very quickly. It was like bees round the honey pot; everyone who saw it wanted to use it as it was such an original idea. Plus, the aspect of a seamless one size fabric offering cost effective and no waste manufacturing, which at that time, due to the recession, provided the perfect solution.
It was so novel as a textile idea but I met so many rogues too who tried to copy it, as well as great partners who have continued to use it for 40 years, such as Hunza.

How did you arrive at the idea of making an elastic seamless crinkle fabric? How much time was spent on researching on this?

It was over 6 years in the making. It originated from a physical and technical inspiration and as my knowledge and training developed, out popped the idea. As a child I was very focused and determined to achieve something original, and thought I would focus on garment design as I loved sewing and making. Then I discovered textiles at college and I realised that if could make an original cloth I could create an original concept in clothing. This became my passion and what drove me to making it. I work like a sculptor / artist at heart and see cloth as an outer layer to sculpture on the body so 3D is important. As I trained I looked for methods to achieve this. I was a gymnast too as a teenager and I was very conscious of the proprioceptive touch of cloth on body and how it gave me confidence mentally in my movements; so this too connects to the cling of the seamless cloth on the skin like a second skin. Protective, secure, and attractive.?

What were the initial challenges you faced while developing the Maxxam fabric?

Making it in production... going from a college machine to industry and running at high speed ... but my connection at Courtaulds helped me connect the idea to a suitable factory.

What has been the growth story of Maxxam till now? What is the current valuation of the company?

It was vast for many individuals in the 80s and 90s as it was licensed all over the world. I received royalties at that time which were reasonable but my profit now is far more lucrative as I'm handling the converting, not licensing and leaving it to other companies or converters to manage. Desire for the fabric has grown pretty fast in last 3 years again. The companies I work with now are doing extremely well and I've also helped some friends from scratch by handling their garment making too, taking them from a few hundred pieces a week to a few thousand a week. During lockdown the Maxxam Textiles business has doubled and we are now expanding our knitting capacity to support our customer's growth for the short and long term.?
What makes me happy is that it has regenerated so many jobs in both garment making and textile manufacturing here and overseas and keeps my factory very busy too. We keep all manufacturing in the UK so we can control its production.

What is the market of Maxxam fabric today?

It's extremely popular worldwide and has a long future ahead of it as we expand on many more of its seamless innovations.
Published on: 19/05/2021

A product far superior to surgical and N95 masks

Market for socks growing at 11%

From a ‘sunset’ mindset to ‘sunshine’ approach