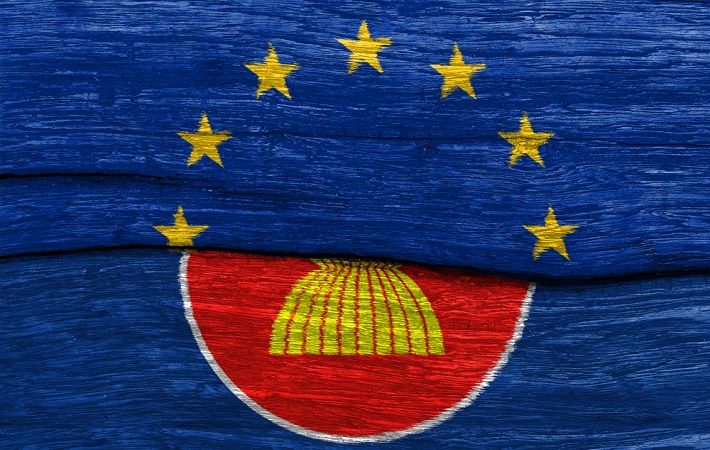 Pic: Shutterstock
The Association of Southeast Asian Nations (ASEAN) is set to resume free trade agreement (FTA) talks with the European Union (EU) after negotiations were suspended in 2009. The EU Commission on Trade has agreed on a joint trade and investment programme, said Thai vice minister for commerce Sansern Samalapa, who acted as the chief negotiator at the September 8-9 ASEAN Economic Ministers (AEM) virtual meeting with the EU, the United Kingdom, Switzerland and Russia.

The two sides agreed to prepare negotiations for an ASEAN-EU FTA and hold joint expert meetings to build mutual understanding on new trade issues like e-commerce, government procurement and sustainable trade and development, according to media reports in the region.

ASEAN is set to resume free trade agreement talks with the EU after negotiations were suspended in 2009. The EU Commission on Trade has agreed on a joint trade and investment programme, said Thai commerce vice minister Sansern Samalapa, who was the chief negotiator at the September ASEAN Economic Ministers meeting with the EU, the UK, Switzerland and Russia.

He said Thailand has emphasised the importance of an ASEAN-EU FTA as it would create a favourable environment for trade and investment in the region.

The EU started FTA negotiations with ASEAN in 2007. After negotiations were suspended in 2009, the EU decided to pursue bilateral trade agreements with nations.

Six Asean members have begun talks on bilateral FTAs with the EU: Singapore and Malaysia in 2010; Vietnam in 2012; Thailand in 2013; the Philippines in 2015; and Indonesia in 2016. FTAs are in effect with Singapore and Vietnam, ratified in November 2019 and August 2020 respectively.

Negotiations are continuing with Indonesia, while talks are on hold with Malaysia, the Philippines and Thailand.

Cotton production and exports of Brazil may go up in the current...

Cannot see the world breaking away from cotton & polyester

Led by MMF, Indian apparel exports likely to double in next 3 years

From design to raw material to fabrication and ultimately to delivery -...

Freudenberg Performance Materials is a leading global manufacturer of...

Inspired by the rich traditional crafts of India, Sunita Shanker¡¯s work is ...